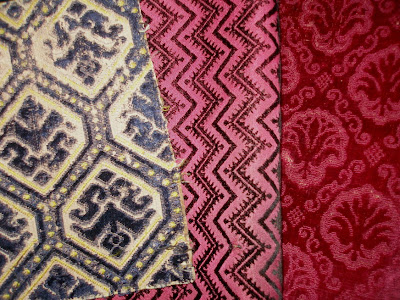 all Italian, 16th century, silk velvets
image is my own

I’ve been doing some research on some new/old velvets I received this week and in my wanderings about computer land I found some tasty morsels…. amazing old shoes! I’m sorry but Manolo Blahnik has nothing on these beauties. Trish over at Trouvais is going to love these! 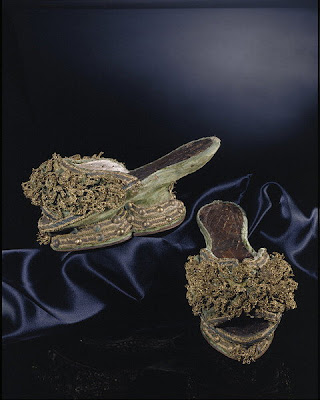 Chopines shoes, circa 1600, Venice
image above and below via V&A

Shoes of this type are called chopines or pantobles. The design was based on shoes worn in Turkish baths. Could you imagine wearing shoes made of wood covered with silk velvet and trimmed with silk ribbon and gold lace? 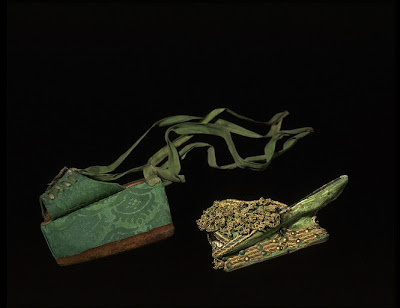 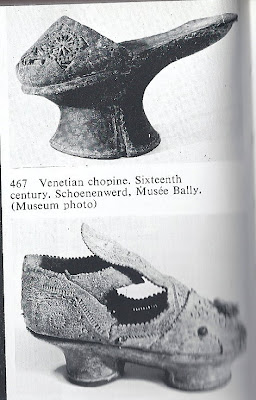 images of shoes and dress via book
"20,000 Years of Fashion" by Francois Boucher

Here are a couple of more chopine shoes, they don’t look very easy to walk or balance in especially when you’re wearing a gown like the one below. 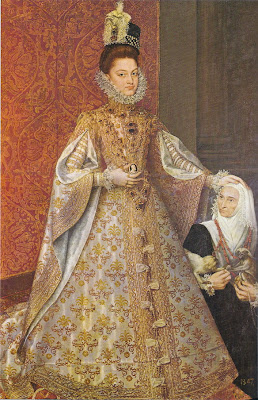 I think if I had to wear that heavy gown laced up my neck while balancing on the front part of my feet I too think I would need a minion to balance on! 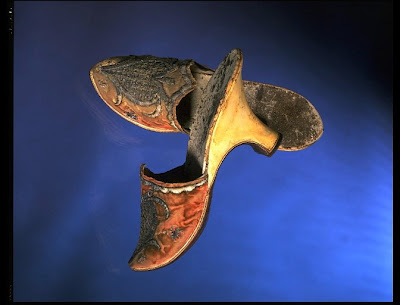 Women's high-heeled mules, commonly known as slippers. These have a fairly high heel and a pointed toe. The velvet uppers are decorated with metal thread. The embroidery was all done by hand and without electricity to see by, amazing piece of artwork. 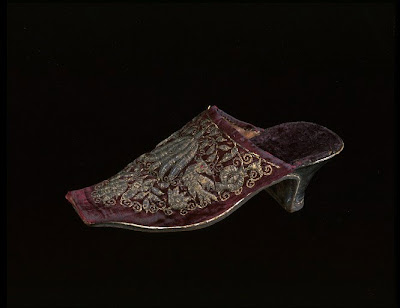 Pair of women's mules or backless slippers are made of velvet embroidered with silver-gilt thread. From about 1550 to 1700, embroidery became very fashionable and mules were often decorated in this way. Talk about luxury! 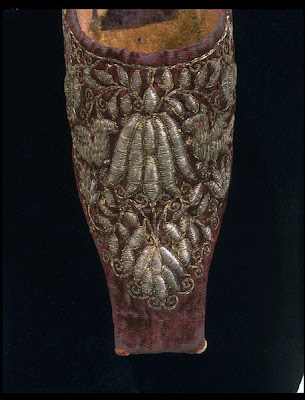 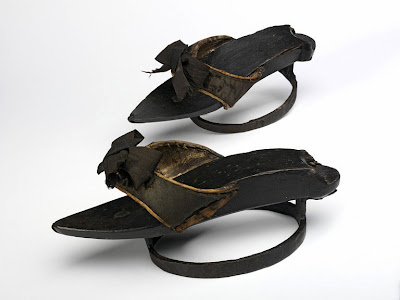 Pattens were worn to lift the shoe out of the dirt and damp while balancing on the iron ring. The shoe would have been fastened into the patten by means of ribbon-laced latchets covered in velvet. Sounds convenient huh? 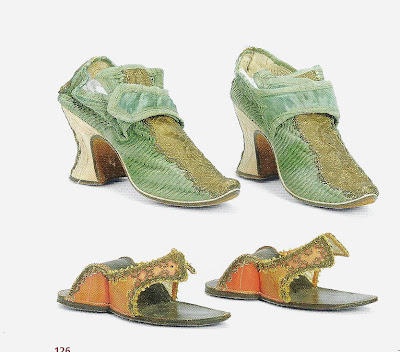 Pair of 18th century green silk damask shoes and a pair of pattens, both with gilt braid. These pattens don’t have the iron ring but you can see how they would have fit under the shoes, that hump would have been up under the heel. 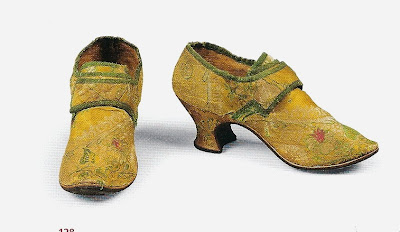 Yellow silk brocade shoes from the 18th century. Aren’t they wonderful? Shoes like these can cost anywhere from $7000 to $14,000 at auction today and no, I didn’t buy them! 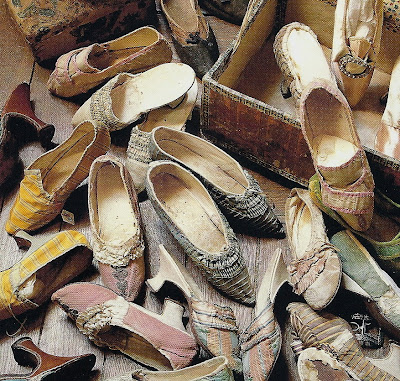 Aren't the shoes amazing all grouped together? 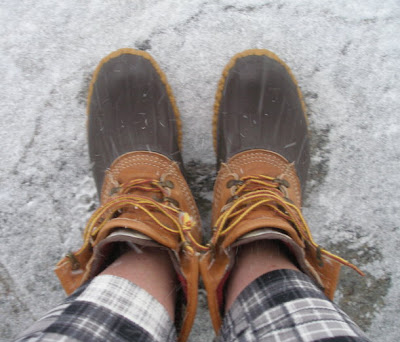 image via my feet!


Unfortunately it’s time to come back to my reality of snow and functional but ugly footwear. Nice huh?
So which century of footwear are your favorites?

I hope you are all staying warm and dry on this very snowy day!

Posted by Acquired Objects at 7:43 AM

Oh! such prettiness, the elegance of them all take my breath away.
The Marie Antoinettes are very pretty but my favourites have to be the green silk damask pair from the 18thc.

comfort baby,
I'm all about the comfort ... hehe

Wow, the Marie Antoinette image by Adrien Goetz is beautiful...

Ahahahahahahahahahahaha! You made me laugh so heartily!
Lately, if the shoes aren't made by Uggs I don't put them on my swollen, pregnant feet!

Looove velvet, so lush and luxious. I am really into green and nave for some reason..and those shoes are so fabulous...but all I could think about was pinched toes:)

Wow i must still be waking up...meant LUXURIOUS AND MEANT NAVY..yes I do know how to spell...lol

Oh, these are beautiful. L love antique/vintage/old velvet. It would be fun to have a modified pair to wear as slippers around the house. I've been wearing my Hunter rubber boots outdoors everyday for as long as I can remember.
Deborah

those shoes are fantastic; I loved seeing all the rich, worn colors and different styles.

What a wonderful post!! Love all of these of course especially the brocade and velvet ones. The Italian fabrics at the beginning are exquisite - and they're yours? What are you planning to do with the old ones - I'd be terrified that they would get worn to the threads - I guess pillows would be ok. Laughed at the end with your Sorels (I of course own something similar).

omg! i have your same boots!!! too funny.

love all the old shoes, but some are so ridiculous. hard to believe it hasn't been that many years that humans wore those shoes. but look at fashion today, hmmmm. those high platforms, 6 inch heels. one day they'll laugh at ours too.

After wearing my heels to dinner last night I can tell you some things haven't changed much *winks* We still have dangerous platforms. Ahhhh but those you've pictured are so beautiful! The pattens really make great sense. And are so wonderfully sculptural. I'd love to have some for display...Well I'd love to have any of them for display *winks* Your new/old velvets are amazing. I'm still looking hard my friend but can't find much of anything older than the 19th century *sighs* And that last picture is a hoot! I have those boots too! Vanna

Such beautiful Antique footwear to behold... but I imagine NOT to wear. My fav footwear... barefoot!

I took a course in costume history at Fashion Institute of Technology in New York. Our professor told us that chopines were originally worn by prostitutes in Venice, streetwalkers. The height was to keep their feet clean from the horse muck and other debris and mud in the street. The look caught on with the upper classes.

Our feet look about the same right now!

Your silk velvets glisten on my screen-they're beautiful! While the shoes are definitely luxurious with some great craftsmanship, i grimace at the thought of wearing a pair-ouch. Looks rather painful. I'd much prefer a pair of your shoes:-). I hope you're keeping warm too. XX

Most of the shoes are beautiful, but some of them are down right funny looking.Can you imagine? Yours look much more comfortable. What does Dylan think about all of this snow?

I would love to have for myself the English shoes from the 17th Century, don't look too uncomfortable. But to be practical...... For now I prefer the ones you're wearing!

Have a lovely and warm weekend!
Karin

They are all so beautiful but certainly don't look very comfortable. I can't quite imagine having to wear any of those shoes. It's all about warmth and comfort now...I'll go for your shoes!
I understand you are getting more snow and ice today. Enough! Stay warm.

Now I know all about shoes, thank you, I learned something new and had fun doing it.

fabulous I never tire of looking at old shoes of distinction certainly not for rushing about a more gentile time ! fay xx

Your blog is outstanding! Love these shoes. And, thank you fofr entering the jewelry giveaway at Art by Karena. I'm the designer and wanted to reach out to all the lovlies who have entered the contest.