That boy sure is handy! 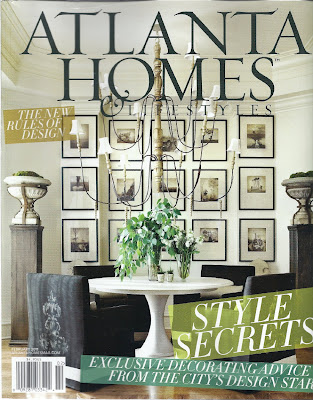 Ever since I saw the cover of the February issue of Atlanta Homes & Lifestyles magazine with this image I have been coveting those pedestals and urns. Unfortunately they’re antiques and already sold from a shop that no longer exists. I’ve searched everywhere for affordable antique pedestals but they’re usually over a thousand dollars and new ones somehow never look the way I want them to…..what to do?

WHAT TO DO, why show the magazine to mister man of course because he could build those pedestals easily. I mean how tough could they be to make, they’re just a couple of pieces of wood banged together, some decorative trim and voile, wife happy right? 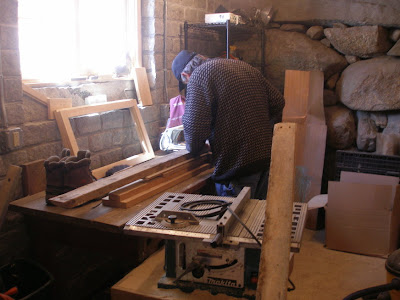 If there’s one thing mister man is it’s accommodating and he likes building stuff so he said no problem. He took a look around to see what he had on hand to make them with, of course this is where I had the problem…not spending any money to buy nice new clean wood? You see that dirty piece of wood he’s working on and the one leaning up against the table saw, when he said he was using it for my pedestals I had a moments hesitation. Those dirty 2x4’s were used for the cement forms for the footers of the barn stone walls and he used that wood as a straight edge when building the stone walls, haven’t they’ve done enough duty already? I was a tad panicked! 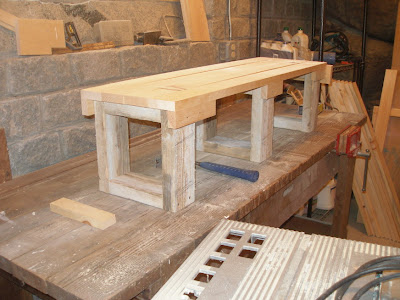 I tried to say something but he said not to panic and I guess when someone else is doing you a favor you shouldn’t question…yeah right! But it’s all good he was only using that dirty wood for the center forms and nobody would ever see it. 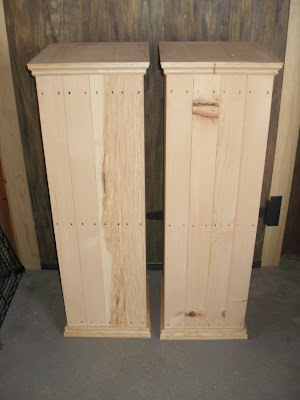 He even had some nice clean 100 plus year old antique pine wood for the face, it was a rejected piece of pine from our antique flooring going in the upstairs part of the barn. It was rejected for the floor because it had a very large knot and split in it but mister man had no problems with it. Kind of nice that the things that went into renovating our antique barn was also going into my pedestals. 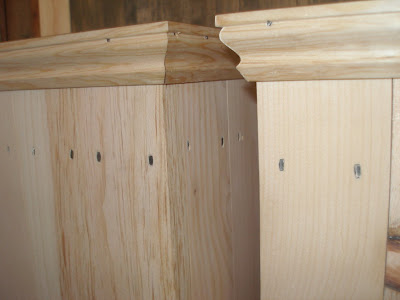 He even had cut nails that look antique since the round new kind wouldn’t look right. The only thing he had to buy were the two different trims for the top and bottom and those only cost $24 all total. The heck with thousand dollar pedestals mine just cost $24 bucks and twelve hours of mister man’s time! He even made them to the height and size I wanted…what a guy huh?
(Yes I’m sucking up here!) 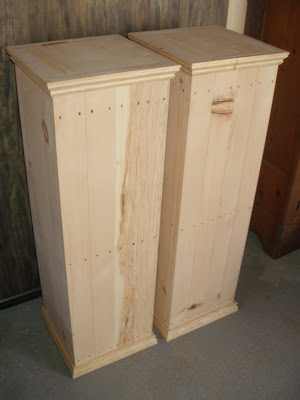 So what do you think? They came out exactly like the picture minus the beautiful gray stain but now it’s my turn to add those touches since I never ever let mister man paint anything. He hates to paint/stain and he's really bad at it, it's always good to know ones strengths. 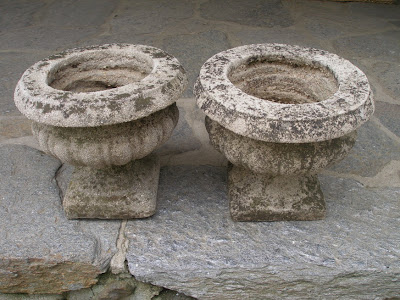 Some beautiful antique urns courtesy of Brimfield, the lichen was free! 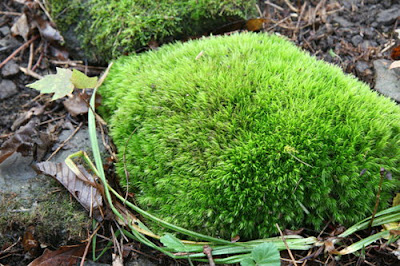 I've ordered some dried moss to place in the urns and I think we're almost set, just have to stain those puppies but it has been raining here for a solid week! Mister man is definitely a keeper huh? He's always making me things from pictures, love it! So what do you think of my new/old pedestals?

Hello:
We think that these are going to look absolutely wonderful when completed and we do hope that you will post an image of them when they are finally in situ.

These look great Debra, congrats to your hubbie! Let's see the other stuff he's made you, we know he has the workshop downstairs!
Wishing you a great weekend
Sharon

You could easily paint them, 'marbalised', and they would look like old ones.

Had several pairs made in different sizes, painted them by myself (very easy to do) and they are more than useful. Will send you pictures.
Have a lovely weekend Dear Debra,
xxxkarin

Love them! And I can't wait to see them displayed in all their glory *winks* Your honey did a great job. Vanna

PS Am your newest follower

Splendid idea! Want some more pedestal inspiration? Go to: www.countrychique.nl
Click on "sfeerbeelden" in the left side bar and scroll down a little bit, you will find a very beautiful grey pedestal ( hand made)with a beautiful urn.

Wow I am impressed! He is talented, wish I could hand over my visions to my hubby and have them wave his magic wand and make them come true! Lucky you!! I can so see it when its done, it will look exactly like your original inspiration...what color will you stain/paint them? Even a limed oak could be gorgeous. Love your planters too...so pretty! You are a great pair. Have a lovely weekend....hope the sun comes out.

Oh Debra, you know I'm dying over them. I wish I had a Mister Man like that. He did a fabulous job. we've had some made for clients in the past, but didn't have old pine or old nails...These are wonderful. I love your old urns too. We recently sold a similar pair to a client that is accumulating for a country house they are building. We have simply got to do some pedestals like these. Love, love,love the moss too. Can't wait to see them stained. I hope you'll share your secret color with us. Have a great weekend. Mona

They look great and you'll love them all the more since he made them for you. How wonderful that Mister Man enjoys making things for you. Have you ever considered renting him out? lol Maybe we can use this post to guilt our husbands to making some for us.
Have a beautiful weekend!

A beautiful inspiration and idea,
Hava a happy weekend,

Wow! I am so thrilled for you! Those are gorgeous!! And I also love pedestals but can only find very pricey antique versions. Bravo to Mister Man! ;)

LOVE, LOVE, LOVE pedestals!!! I have 3and one is similar to yours, but not as substantial. I am so impreseed with "Mr. Man"...that made me laugh, as did the dirty wood bit...I totally get it.

Can't wait to them complete, what a great project!

I think you are brilliant and I can't wait to see it all finished! Seriously good job :)

I would say that Mr. Man is a very talented and creative guy. You are a perfect pair! I am absolutely head over heels in love with your pedestals. I can't wait to see how you will paint or stain them. You made me laugh with the dirty wood dialogue...I sooo understand. Your planters from Brimfield are perfect. I hope you are having a great weekend with sunshine!!!

Your Mister Man is quite handy around the house, I must say! If mine were I'd have him busy all the time. I've got tons of ideas & projects in my head that I'd like to get out!

Its a grat job, i love them.

Have a nice sunday
Jérôme

Hi Deb - Those pedestals are great! I can't wait to see the finishing version--I hope the rain lets up so you can stain them and post the pics. You mentioned the urns are from Brimfield...did you go to the spring show?
Deb

Oh Debra! Your husband does a wonderful job!!! I love the pedestals! And I have also a picture of pedestals awaiting for my husband!!! I will send it to you right away!!
I also want to thank you for your so sweet comment on my blogpost of today!!!
Hugs,
greet

I must say, you are one very lucky gal to have that guy placing his boots under your bed every night! Those pedestals are fantastic and I can't wait to see your finished product with the stain completed and the urns on top. Will be simply MARVELOUS!!!

Debra- The pedestals - amazing! Nothing like decorative and appropriate nail heads to say HE LOVES YOU!

How blessed are you to have someone who loves to fulfill your decorating projects!

What a guy! He did a great job- do you read him all of these lovely comments? I can't wait to see them finished- beautiful urns too!

WOW - the 2 of you are quite the team - these are going to look FABULOUS!!

Just found you via Jane & Lawrence's blog for weeks have been searching for a pedestal for a head sculpture,wow to have found your great man could you send him over???

Thinking about showing my beloved your photos!!!

They are fantastic you are one lucky gal.Ida

Your new pedestals are fabulous and I am in love with the urns. Mister man did a wonderful job!
xo,
Sherry

Love this! So great that you were able to recreate what you saw on the cover! Looks great!
xo E + J