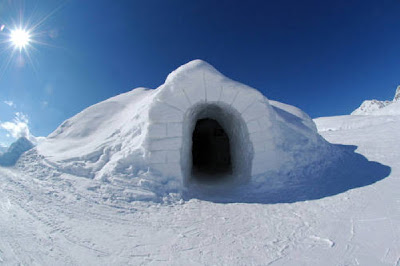 It’s official, we have just enough snow and ice to build one of these…an igloo! We now have over three feet of ice-covered snow down since yesterday and it’s still snowing. We were lucky and received a half inch of ice on top of our snow last night. So if we can’t beat it might as well see if we could do something with this mess. Igloo hotel anyone? 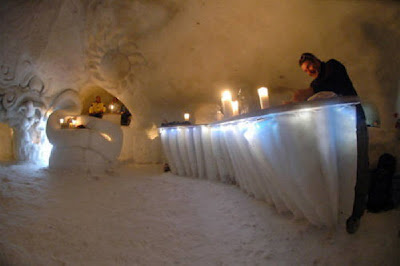 First stop is the igloo lobby! 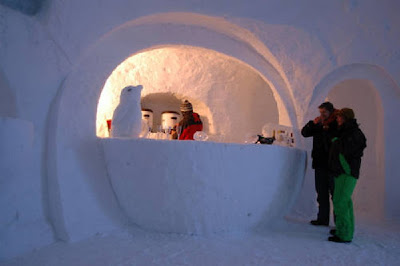 After checking in how about a cocktail at the igloo bar? 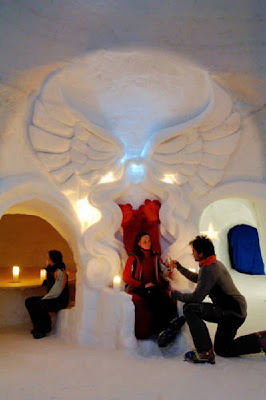 You could sit on this igloo bar stool to rest your weary bones. 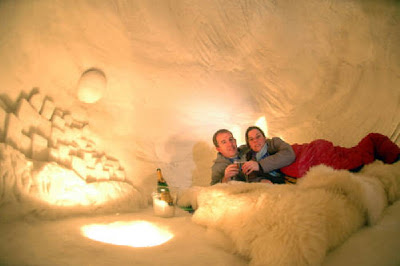 This is the honeymoon suite, doesn't all that snow and ice make you want to rip your clothes off? I don't care how much champagne I've had I'm so not going there! 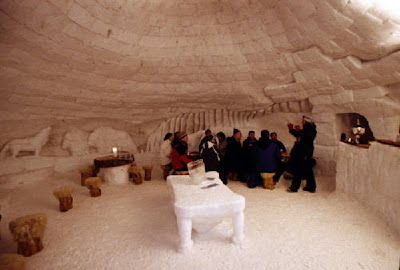 This is called the big room in the igloo. Look at that you can make your own furniture in a nice neutral color.

Believe it or not but a lot of engineering skills go into creating an igloo although that igloo, there on the right looks a little scary, the blocks look to be coming down. 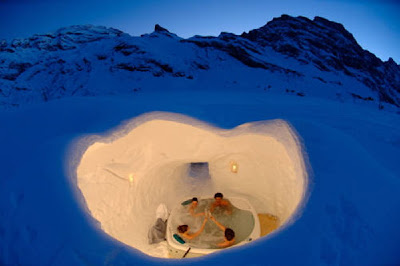 Or how about a dip in the igloo jacuzzi? I think the heat of the water is melting the ceiling.

Actually igloo villages and hotels do exist in Switzerland and Germany for those who are willing to give it a try but book quickly because come April they’re closed for obvious reasons.

Posted by Acquired Objects at 11:19 AM

I mean really now ...
anything for a news story

This is UNREAL. I saw it else where and it was just so crazily cool...had to show it to my kids and husband. WOW...what don't we have in todays world? Thats really something....and I thought it was cold here in NY!

Love these - and how about the Swedish ice hotel!! My mother was the most fabulous igloo maker - she used to make my sister and I a compact one whenever we got enough snow!!

WOW!!!
I hope you are staying warm with all that snow!
Happy January!
Xo,
E&J

So cool! There's an Ice Hotel up North in Sweden also. I really want to stay there, although I'm a freezer. :)

The only place I've ever seen as much snow as you've got is when off skiing! Can you imagine Paris under a meter of snow, NOTHING would work.
We look forward to photos of you in a steam tub in your home built igloo.
Sharon
x

I've always loved these. I watched a feature once about one on t.v. They're really pretty cool! I sure hope you get some relief from all that snow soon...Otherwise your next post will be about you making several of these igloo hotels:-). XX

BRRHH - Debra! What an interesting post and pictures! Because it is suddenly again freezing cold here in the Périgord, just looking at these pictures I'm shivering.

I would definitely love to visit one day an 'Iglu-Hotel', not staying over night (I'm not an Eskimo ha-ha) but certainly having a few drinks in the lobby to warm me up! I seem to remember that the first of this 'kind of hotels' was build some years ago in Switzerland.

By the way - Just want to tell you that your Antique fabric and Tapestry-Pillows collection is absolutely fabulous and stunning!

And thanks a lot Debra for all your comments to my posts!

Yikes three feet of snow??!! At least you're making lemonade from the lemons *winks* I can't imagine wanting to sleep in one of those ice rooms but they're always booked up!......So NOT romantic! Well my friend have a nice shot of vodka or aqvavit (at the perfect temp) and stay home and warm! Vanna

When we were in Switzerland last fall, we went to the Ice Palace at the top of the Jungfraujoch mountain (Near Brienz, Switzerland). It was amazing just like your photos here.

Brrrr!! I'm a sun bunny myself.