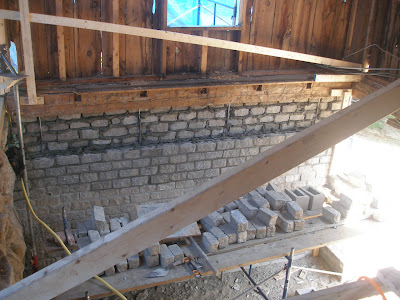 When I last left you mister man was finishing up the front granite stonewall. While he was busy our contractors were busy straightening our barn. As you can see the original floor had to be removed since the joists weren’t close enough together and it made straightening the barn out that much easier. The sills were all rotted since they weren’t pressure treated, they were 220 years old and once again water was a problem so the barn had a definite lean backwards. 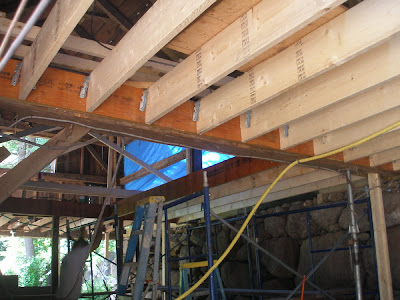 New floor joists going in the middle to give the contractors somewhere to stand inside. Everything had to be beefed up and brought up to code. 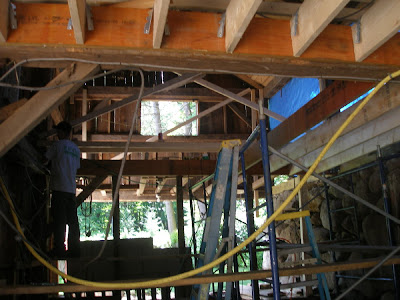 This picture you’re looking out the other end of the barn and you can see the barn boards have been removed to make way for the other granite stonewall mister man will be building on the lower half. That granite wall will be one long wall in mister man’s workroom. 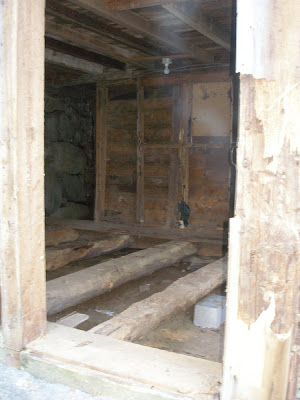 Mister man’s workroom with the floors removed, it was a dark and dank little place and was used as a chicken coop at one time. We know this from items we found buried under the floor. Look how cool the floor joists are, whole tree trunks, those are being left in place since no rot. 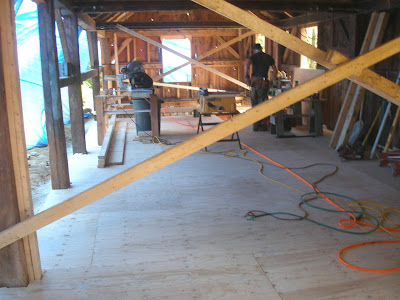 Plywood was placed down on the new floor joists so the guys could have their equipment inside in case of rain. They’ve only done the middle of the floor up to this point, the cross boards were placed to keep people from accidentally walking off into space. 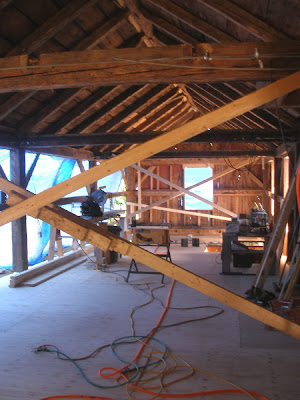 If you look at the beam just above the cross boards you can see steel cables running along it, these cables were used to slowly bring the barn back into an upright straight position before placing the new sills. Since they had to bring the whole barn forward a total of eight inches, which is actually a lot, and it’s attached to our home it had to be done slowly over several days. 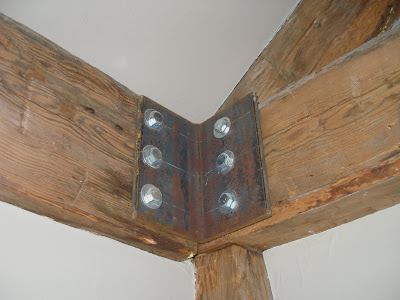 The beams on our barn were attached to each other just by sliding them together in notches. In order to make sure they never split apart again each corner where the beams met were reinforced with thick metal plates. 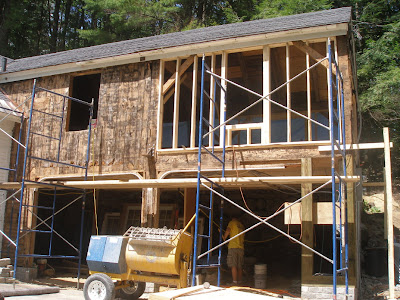 After straightening out our barn then the window framing went in and as you can see the new insulated windows are longer/larger then the old windows. Look, mister man cleaned up most of his mess in front but that cement mixer needs to go, unfortunately he felt the need to purchase that silly thing! 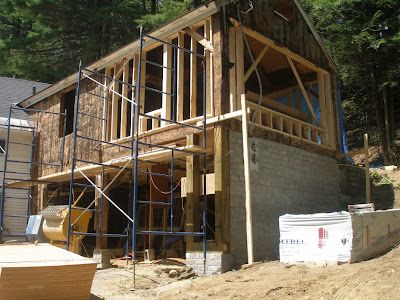 Just look how big that window is going to be, yes the whole wall! Can you imagine how I felt seeing that? I was jumping all over the place with excitement! The half round window is going right above the big window the light will be amazing!!! 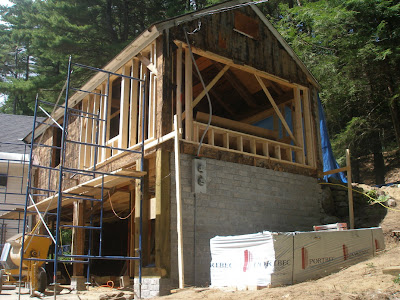 Since the frame is so big the contractors had to place some cross framing to hold it in place until the window was installed. 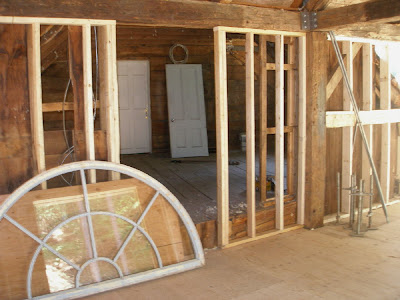 Here’s an inside look at the annex just off the carriage barn where I'll store pillows and textiles and aside from being striped to the bones it hasn’t been touched yet. Sort of looks lonely to me. 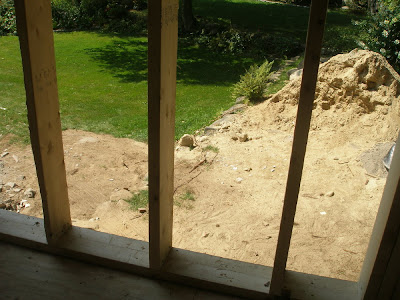 And once again we have another pile of dirt but this time out back I was surrounded by piles of mess everywhere. 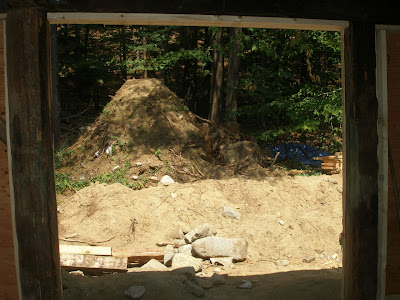 This small mountain of dirt is out the back of the barn where they had to dig out in order to place the new sills. Trust me it reached a point where I didn’t think I would ever have a clean house again since this job started in late summer and I wanted windows open. It's New Hampshire and here we don't need air conditioning 99% of the time so windows are open. Our entire home was surrounded by some kind of mess and this wasn’t going over well with me.


Stay tuned for next week for an amazing transformation! 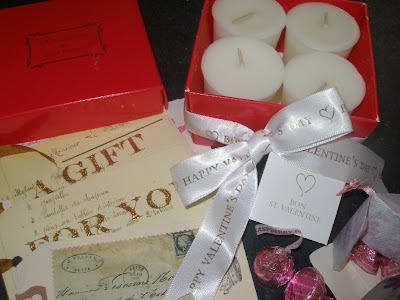 I would also like to thank Ursula over at Aged and Gilded for the wonderful limited edition candle from Seda France. I won her Valentine Day giveaway and I wish you could smell these candles of tuberose, clove, white floral and spice, they’re out of this world!!! Tuberose is also my favorite flower so I was thrilled to have won these votives. Thank you so very much Ursula!

Posted by Acquired Objects at 11:01 AM

Mister Man is doing an incredible job. Is he as excited as you are about this project? Thanks for the update. this is going to be amazing. Mona

Thank you so much for the personal barn alert - I came straight over! I'd heard jokes about "can you just move that building 8" to the left, but up till now I didn't know anyone who'd actually done it!!
This is a great series of posts.
Sharon
x

This is something else...I can't wait to see it as it moves along..coming along beautifully and my mind races away when looking at the pictures about all the elegance and fabulous textiles you will fill this incredible space with. What fun and what a glorious project!! Thanks for keeping us in the loop and allowing us to travel along with you....

Debra I'm starting to see what a really enormous undertaking this was! Did you ever consider just tearing it down? Don't get me wrong I'm so glad that you didn't!But it had to be trying at times? I can see what a beautiful space it will become.... really one of a kind. Vanna

If I had to undergo this transformation I would go so crazy that, in comparison, Charlie Sheen would seem rational!

What a wonderful transformation that will be! Stunning! Thank you for letting us follow the process!!
xx
Greet

That thick metal plate joining beams and the original floor joists - incredible and great to see, same with the stone work. The whole barn is wonderful in progress, thank you for such a great post.
- Joy

How interesting to watch the transformation, know you can't wait to finish. Thanks for sharing your amazing renovation.
~Emily
The French Hutch

I'm excited to see the barn finished, it is indeed a great job you are doing ...
Thank you for letting us follow the process!
Have a nice evening
xx
Lene

It's really moving along...loving the process!!