When we purchased our home I already knew this was my husbands old pediatricians home, my husband grew up down the road from here, talk about going full circle. His pediatricians name was Margaret Reynolds and she had moved up here from New York City just like my husband and I did but she moved up here to retire. Since there wasn’t a children’s doctor around these parts some of the townsfolk got together and talked her into going back into practice. I know this story from some of the townspeople who knew her. Margaret lived in this great big old house alone for over forty years and after passing her ashes were buried in our backyard on our raised tier where she still resides. 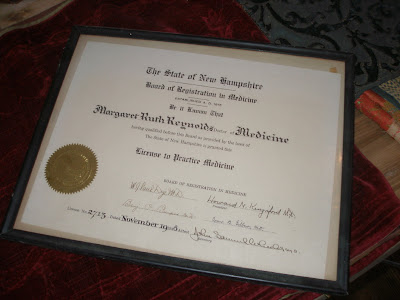 Margaret loved this house from the stories people told me and never wanted to leave, probably why she wanted her ashes to rest here. One day about a year after mister man and I moved in we were in another town antiquing. We stopped at a small run down shop out of curiosity, the place was a mess with box after box of old papers and whatnot piled on top of each other with barely room to walk. Turns out this shop owner was the one who cleaned out Margaret’s home after she passed and sold most everything and that’s when mister man started hitting me in the arm. There, laying on top of a bunch of old papers in a box was of all things…. Margaret’s Medical license issued in 1948. The gentleman, after hearing our story, was kind enough to just give us the license. We brought it home where it hangs in my husbands’ office today.

Isn’t it amazing that after being removed from our home and it was gone for over fifteen years, it’s now back? And in the same room that was Margaret's office. And the one person who had a connection to Margaret is the one who found a piece of her life? I hope she somehow knows that her license made it home.

Posted by Acquired Objects at 5:07 PM

Amazing story, and always amazes me to hear about women physicians when it wasn't exactly encouraged. Enjoy your well-deserved legacy home.

That is a very cool story.
Do you think the good doctor may have had a hand in your finding the remaining piece of her lagacy?

What a lovely story!! It is always amazing when these sorts of things happen but clearly it was meant to be!!

I don't think it was an accident at all. I think it was meant to come home to you...and who knows Margaret herself could've had her spirit hand in it? *winks* What wonderful history to add to your beautiful house.
I found beer cans in my walls from the 90's...yay me...that's the fabulous history my house hides. Nobody said life was fair *winks* Vanna

What a heartwarming and amazing story. Truly, that type of story and that piece of "history" are what make a house a home...one that is full of richness!

Wow...what a wonderful and heartwarming story - have a great weekend!

this is one of the sweetest stories in blogland ... ever

Beautiful! Love what an endearing story this is...it was meant to be and found its way "home". Love these kinds of stories....how wonderful. Thanks for sharing!

What an amazing story! I love it! So excited for you!
xx-Gina

salut from france
don't generally talk about this
as folks look at you sideways!
my partner talks to spirits
your lady knows about this certificate 100% for sure
what a great story
cheerio linda
...

What a wonderful and amazing story. Isn't it wonderful to be able to put together pieces of the history of your home!?! I think two of the best things about New England are history and charm. I am sure she is smiling down and fully aware of the honor and respect you are paying her. Bravo!

lovely story. isn't it a wonderful feeling when things like that happen...? meant to be.

now that is a very happy ending, beautiful
debra

Unreal...like out of a novel!

What a sweet and wonderful story. So glad you shared it with us. Have a great day. Mona

Hmmm...very karmic and a lovely story too.

An absolutely beautiful story, it's amazing!
I have received two awards from Charlotta in Sidney, which I would like to pass on to you. Hope you will accept them.
You can find them at this address: http://theessenceofthegoodlife.blogspot.com/2010/01/thanks-for-awards.html
Have a nice evening!
xx
Lene

I loved this story and connection to your husband and house...so incredible! Certainly, to be part it's history forever now.

Heartwarming...thanks for sharing this wonderful story.

What a sweet story, and how nice that you know so much about your house's former life. Our house was also that of the village doctor about 90 years ago - makes me feel very respectable!
So sorry it's taken me such a while to get across, the days merge one into the other at the moment
Sharon
xx

Best whises for the WE

I've missed you! Here's a hug from Illinois!

What an amazing story! Truly full circle! Cherish the paper and the legacy she left behind!