It's in the Details! 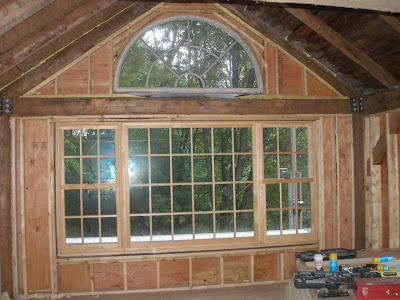 I have to tell you I love that wall of windows, its like being up in the treetops! Now that the windows are in they need to be framed out and I for one was wondering how they did curves since wood doesn’t come rounded. I don’t know about you but I was hugely fascinated by how they did this process. 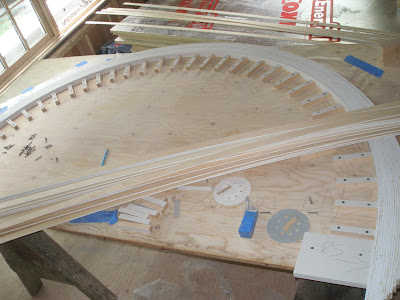 Before the half round window went in they made a template on plywood by simply laying the window down and drawing a line around it. Then they cut and screwed pieces of wood around the inside of the template. Next it was a simple matter of cutting thin long lengths of wood, the thin wood bends, and they glued and nail each piece together. 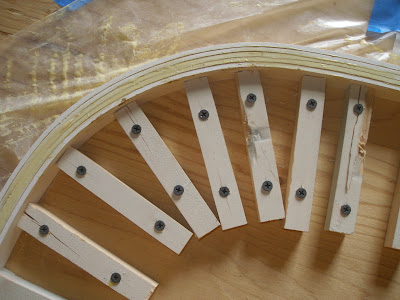 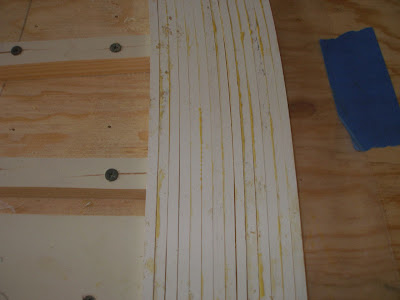 They just kept adding layers until the desired frame thickness was achieved. 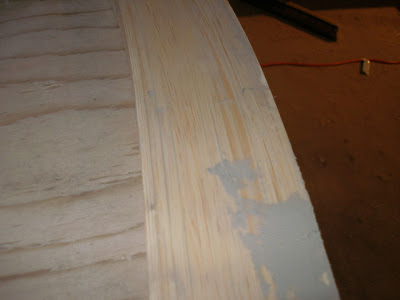 Then sanded the whole frame and filled in tiny holes with epoxy glue that really sealed the whole thing together. 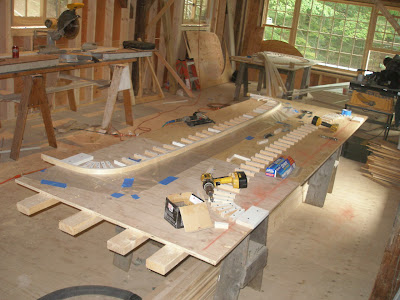 Since our barn doors on the outside needed arched framing our contractors took over part of the barn for this building process while the annex was being insulated with spray foam. (Look out that big window, see the tree tops!) 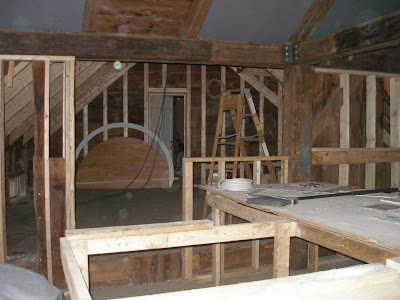 You can see one arched frame for the half round window standing up in the annex along with its template. See how big they are compared to the door? This picture was taken after the annex was insulated with spray foam, you don’t insulate inside walls. You can also see some of the plasterboard going up on the ceiling between the rafters. No insulation needed there since we raised the roof and insulated on the outside. 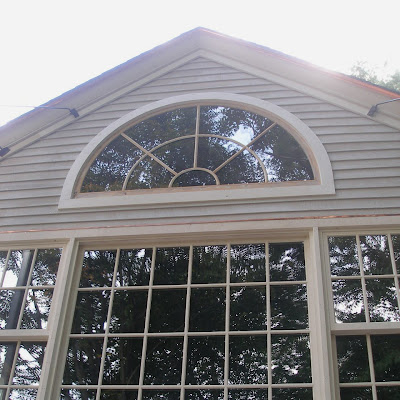 See how nice the framing came out and you can’t even tell it was made out of several lengths of wood rather then one. 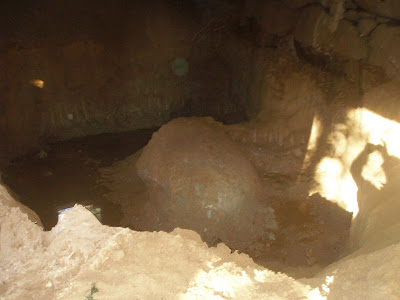 One of the changes mister man and I decided on was the staircase leading up into the barn. Originally it was going to be all wood but since mister man had a bit of antique granite stone left from building the two end walls (and lets be honest he can’t help himself) he thought a stonewall staircase would look amazing. Unfortunately that meant deep digging for the footers since stone is too heavy for a simple sonatube. 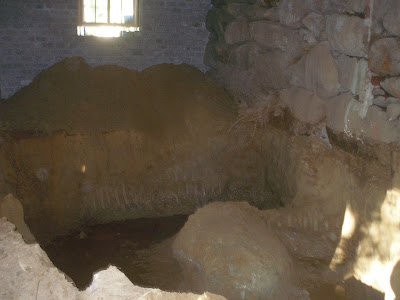 It was a little hairy having a small excavator in the lower part of the barn under the floor joists, there were only mere inches above it to move and every once in a while the whole barn was rattled from the slight bumps from the excavator. It would have been infinitely easier had mister man decided the staircase sooner but there you go! Because the mountain we live on has a natural water aqueduct the hole the excavator dug wanted to fill with water so we had our very own mini moat in the lower part of the barn. 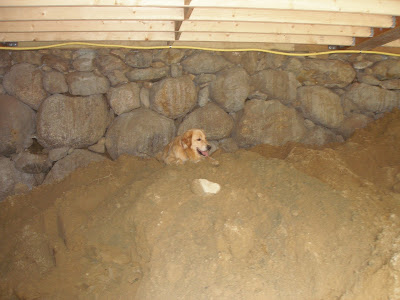 We were going to need the dirt the excavator removed to fill the hole back in after mister man built the footers so it was placed on the other side of the barn. See that back wall of boulders, the entire back of the barn sits on the wall and it extends about twelve feet out into the back under the soil so no fear of that puppy ever coming down. Our entire home sits on a foundation of boulders. 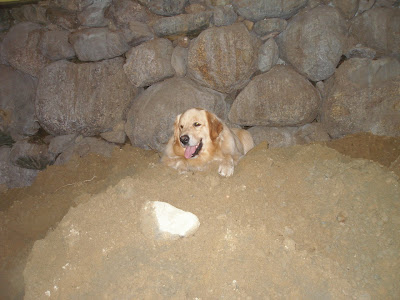 Speaking of puppy, Dylan couldn’t help himself and climbed up on the mountain of dirt. It was cool, he likes heights for some reason, and lets be realistic, he’s a dog, it’s DIRT! Look at that happy face! 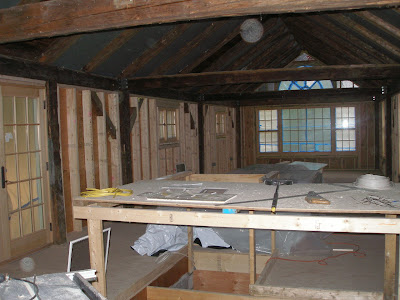 So while mister man went to work on the footers for the staircase and the barn was being insulated it was now my turn to head off and do some wheeling and dealing, time to see about purchasing the antique flooring! Up next the stonewall staircase, wait until you see!

Posted by Acquired Objects at 5:20 PM

Exciting stuff! I am really enjoying seeing it all come together...its all going to be spectacular, cannot wait to see the finished product! Dylan looks so adorable, boy what Teddy would do for a pile like that to go stomping in..thanks for letting us share in your adventure!

I also wondered how curved wood frames were constructed. I always intended to google it, now I won't have to! Thanks for the very interesting lesson!
Soooo....your husband wanted stone steps AFTER the fact? LOL! That's usually something I would do. Not that I have ever been presented with a task that large but it is worth it in the long run for certain!
I love seeing Dylan's goofy smile! Scratch behind his ears for me. Will you?
What is it about dogs and the love of all things messy and even vile? I sprayed the gardens with a product derived from putrified eggs and garlic to keep the bunnies away. It worked but I had to literally DRAG Napoleon away from it! LOL! Disgusting!

oh i cannot wait to see, nothing beats a stone staircase!

and yes the pooch looks happy indeed.
interesting demo on curving wood, was trying in my feeble mind to comprehend the 'how-to'

Such an great way to make a curved window framing. I am enjoying reading you blog and seeing your progress. Antique wood flooring, good hunting! A stone staircase - WOW, can't wait to see it. Massive I bet.
- Joy

Hello:
What an ambitious project but how successful the outcome is clearly going to be. In fact the principle of bending wood is very much as used in 'Bentwood' furniture so much in fashion in the early C20.

We shall sign up as Followers immediately in order to watch your progress.

The framing and trim looks great. I am so excited to see the stone staircase - how great that the mister is willing to go the more difficult route to get the aesthetic appeal!!

It's really coming along now. I agree with your hubby,the stone steps are going to be fabulous!....even if it DID come after the fact *winks* Whatcha gonna do? They needed to happen.Lol! Dylan looks like he's grinning from ear to ear! Were you wearing that same expression at that point? *winks* Vanna

Wow, is this looking good. That window in place is just incredible!

The craftsmanship is so good! Nice to see how they made that arch.

It has been so much fun to watch the progess and development. The stone staircase sounds wonderful and I'm looking forward to seeing the finished results. Everything looks fabulous.
Beautiful Dylan...he looks like he's having a fantastic time with that pile of dirt.
Have a great weekend.

This barn saga is really gripping our imaginations Debra, we all tremble at the talk of indoor moats and diggers coming in AFTER the top floor's in place. Thank goodness you thought to take photos at each stage - we'd never have believed you without!!
Have a great weekend , hopefully finally snowfree
Sharon
x

Oh yes indeed! It's in the details!
I love the window curves and partition!!
And your dog looks so happy!!
Have a wonderful weekend!
xx
Greet

the making of the window frame is so cool! since I'm always wondering "how did they do that" about so many building elements I love reading the construction part.

love D on the dirt! that is indeed one very happy face.

hope y'all are enjoying this fabulous day!!

Oh, it's all going to be so good. A stone staircase? antique flooring? I can hardly wait. Dylan seems to be very pleased with the progress too. What would we do without our pooches?

Ohhhh, love this wonderful window and whaiting for this stunnig staircase.
HAve a wonderful new week,

Everything is looking amazing!! Thanks for the lesson in rounded windows. I've never seen that done before! And I have a feeling you're right: Dylan would be in one of those Dutch doors in the blink of an eye! xo Kristy

Super exciting! The windows are stunning-reminds me a bit of a couple of mine. I love the roundedness. Dylan sure seems to be having a ball too:-). Can't wait to see what's coming next Debra! XX

Wow! It's so easy to take these windows for granted but what we're missing!
I love your home in the treetops, thanks for taking us up to your tree house with you!

Love seeing the project evolve. What a fascinating process.

Thanks for another installment. This is far better than the Saturday morning HGTV series.
So - you are a little excited about being up in those trees, no?
What a great addition those stone stairs will be, again tying all the elements of the project together. Much better he decided now rather than do wood stairs and regret it, and then try to change things.

HOW exciting is this project!!! It's utterly, utterly fascinating - I'm more gripped by this than Downton Abbey - lame I know, but you're giving us more thrills, excitement, and cliffhangers AND Dylan is providing the lighter more comedic moments - perfect combination - can't wait to see what's coming next! x