Have you seen the August issue of Veranda yet? If not run out and buy it now! Pictured on the front is a French house that was once a ruin. Why couldn’t someone have discovered America sooner than 1492 so we could have a few ruins? I wouldn’t mind living in a stone ruin, who cares about a little rubble when it looks this fabulous? If I can live in an 18th century dwelling with all it’s quirks a little ruin is nothing! 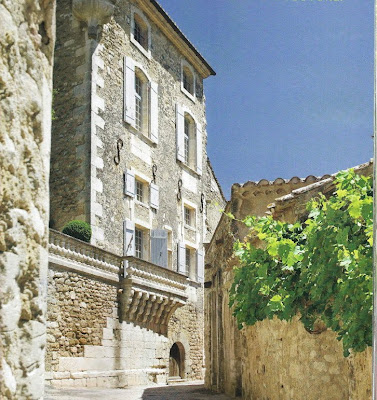 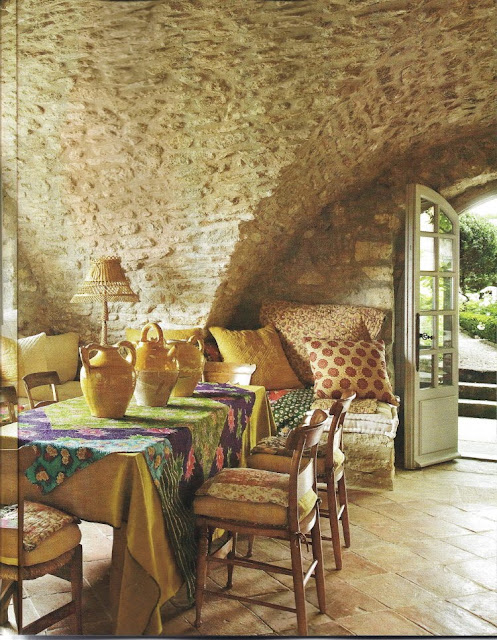 Look at the inside guest patio, those 15th century curved stone arches, that antique tile floor………now I ask you who wouldn’t be happy there? 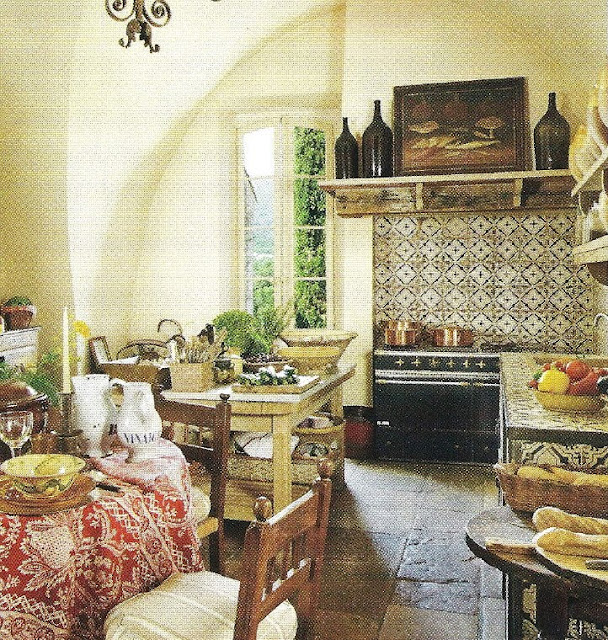 The house was originally built in the 11th century and added onto each century. The kitchen area dates to the 17th century, love how they simply plastered over the arches. Just think if I could afford that house I wouldn’t have to cook except when I wanted to. 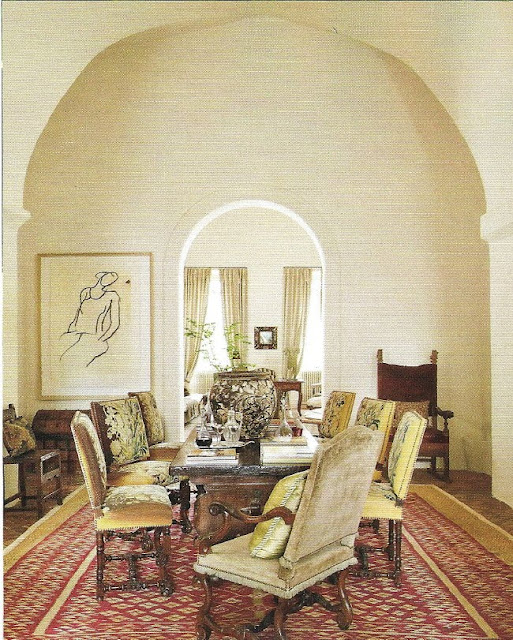 The chairs in the Renaissance hall look to be covered in tapestry that more than likely came from Michel Biehns’ shop since he deals in textiles of all sorts. As an antique textile dealer myself it’s killing me I can’t see those chairs closer. And look at those pillows in the background hiding from me! 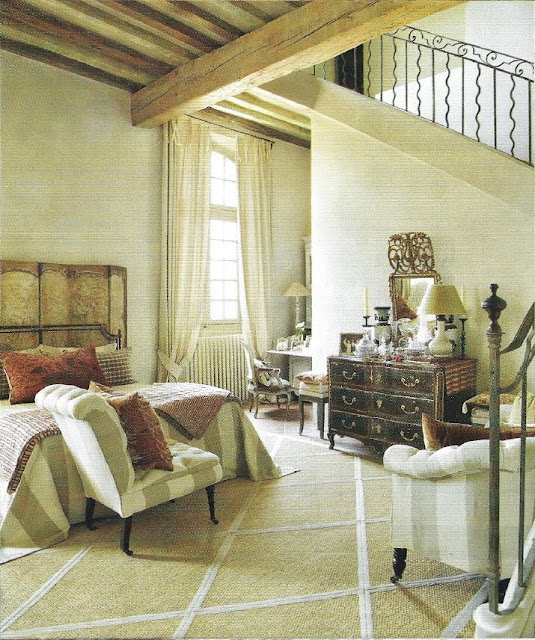 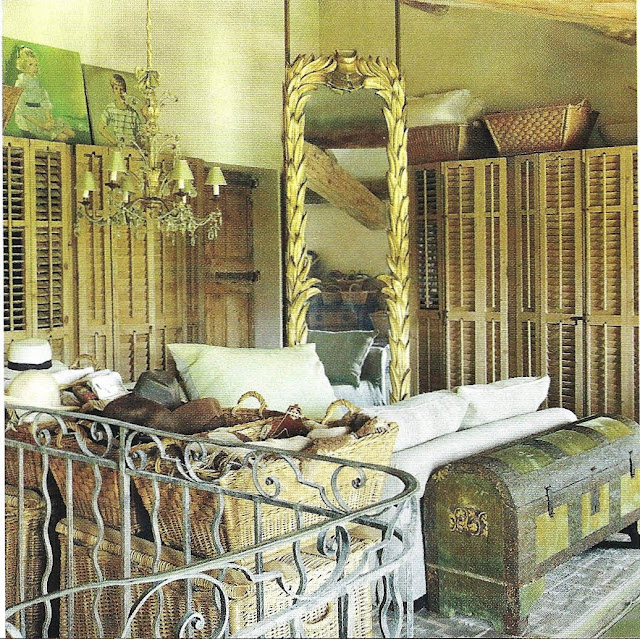 Can you believe this is the dressing room? I wonder if it’s up those stairs pictured in the master bedroom? I love how they’re storing their hats in the French laundry baskets and look at that dreamy mirror, love the juxtaposition between the gilded mirror and straw baskets. Look at the baskets on top of the closets, they give you a sense of the height in the room. 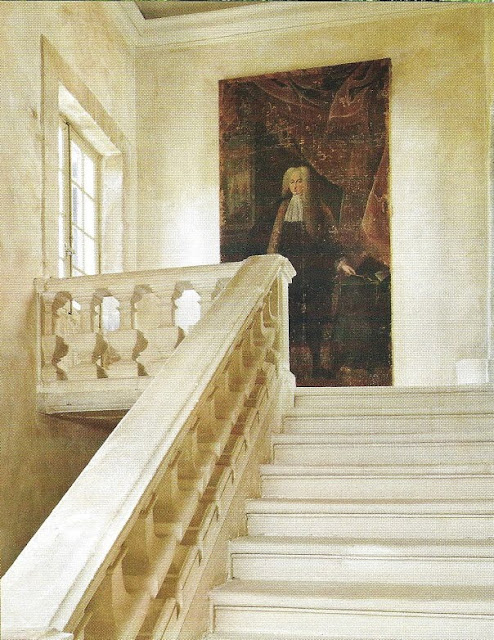 The 17th century staircase is original to the house and was restored, think of the entrance you would make coming down those stairs! Love the huge picture at the top too! 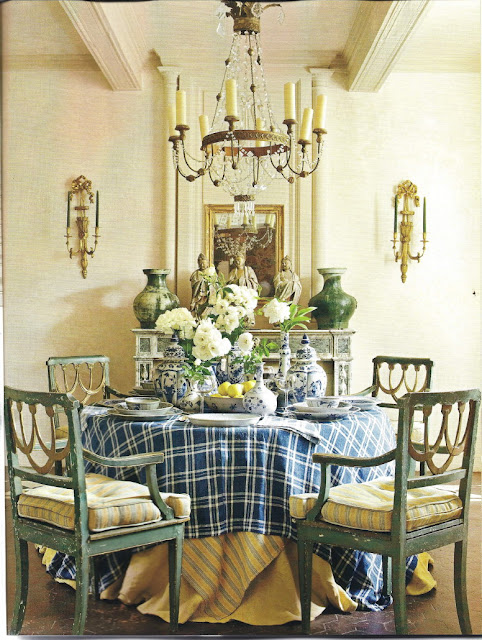 All the silk fabrics just in this small dining room come from Antico Setificio Fiorentino in Florence Italy and can be found Here . Those sconces and chandelier are to die for! And those chairs....come to Mama! They’re in that French Parisian green I love so much!
I love how they used a nice mix of highs and lows of antiques and modern furniture so that nothing overwhelms, tough to achieve. I wish someone would come out with a magazine that shows all the accessories that decorate rooms so we could see more clearly....not to be I guess. I won’t spoil the entire article for you but I couldn’t resist, who wouldn’t want to live in France in all that history?
Posted by Acquired Objects at 10:06 AM

Email ThisBlogThis!Share to TwitterShare to FacebookShare to Pinterest
Labels: Veranda in Provence

I blogged about this house too. I loved the quote from the designer that said something like they had a conversation and ten years of fun. I'm sure I'm not remembering that right but the jest of it really spoke to me. That is the kind of relationship we want with our clients. We don't want to work with everyone, just a few special relationships with people that we are on the same page with. Those are the kinds of jobs you just never stop thinking about!

Love this issue! It's an absolutely beautiful house.

Delighted to discover your wonderful blog...thanks for leaving the comment on FK that led me here. After reading the post on your style progression I do think we have traveled the same path. Looking forward to many more visits here.

Debra, Thank you for visiting my blog and your kind words. I am looking forward to your next post.

Have a great weekend.