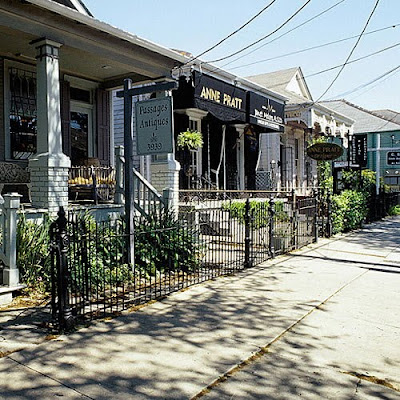 Antique shops along Magazine Street
My best friend and sister of my heart, Debbie, yes we’re both Debs, lives clear across the country from me so once every two years or so we meet up in a different city to play for a week. We decided to meet up in New Orleans since she had never been there and of course there was magazine street to look forward too since we both love antiques. Magazine Street is well known for all their antique shops although there are fewer since hurricane Katrina. 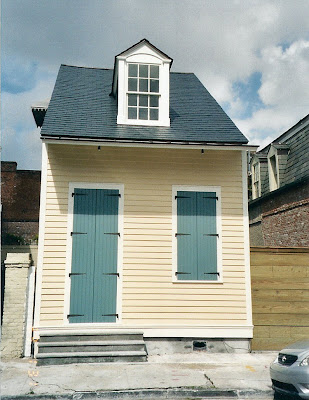 A restored shotgun house with newly added dormer
We stayed in the French quarter and played tourists and the first thing that struck me were the stunning shotgun houses. A single shotgun house is usually 12 feet wide and has 3-5 rooms in a row, sometimes only two rooms deep, front to back, with no hallways and doors that open on the front and back. 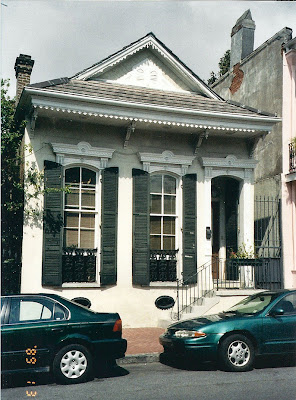 (Excuse the dates on the pictures I never learned how to set that on my camera.)
Shotgun houses were popular mainly in southern cities since they occupied a small area of land, usually 30 feet wide at most, so it allowed a great number of homes to be built side by side. New Orleans housing taxes contributed to the shotgun house since taxes were based on the lot frontage. Later when people tried to take the houses to a second story known as “Camelbacks” the houses were then taxed based on square footage. Since hallways and closets were considered rooms this type of house has no closets or hallways. 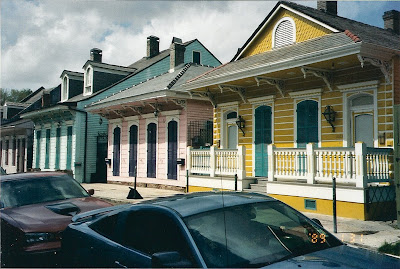 “Double-barrel” shotgun houses that consist of two houses sharing a central wall that would have allowed more homes to be built.
They became known as being a shotgun house for the saying that you could shoot a gun through the front door and have the bullet pass cleanly through the back door since the doors line up on the same sides. I love the vibrant colors used for the house colors. 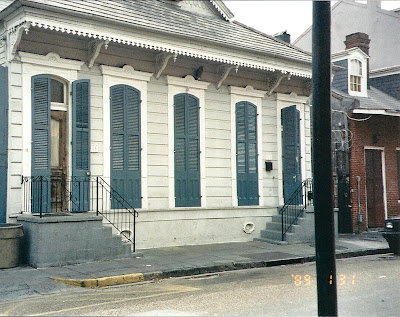 The houses usually had big rooms with high ceilings that helped with cooling purposes, when the warm air rises it helped to keep the lower part cooler. The shutters on the main doors helped as well since the shutters can be locked from the inside and the front door could be left open to allow air flow through the house. 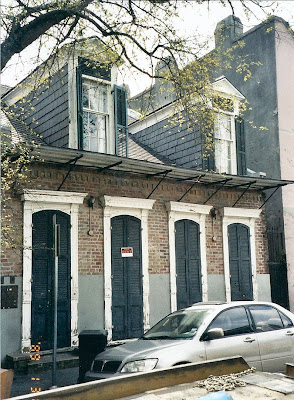 This house is actually two houses the entrances being on the far left and right and each with a window and dormer in the center. The left house is for rent if you’re interested. 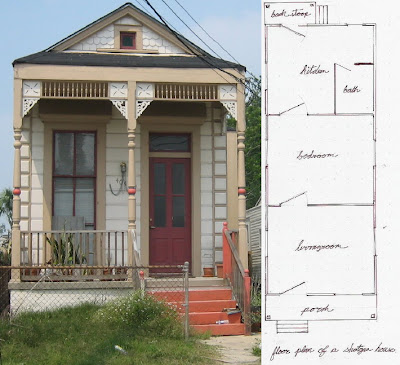 A modern shotgun house with detailed floor plan that includes a bathroom, the original shotgun houses had no bathroom. 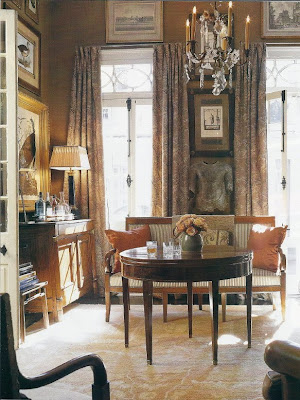 Interior pictures via Southern Accents, December, 2002
These interior shots are from Gerald Pierce’ pied-a-terre in the French Quarter of his double-barrel shotgun house that has been turned into a single dwelling. Gerald is a designer of Jim Thompson Thai Silks in Bangkok. 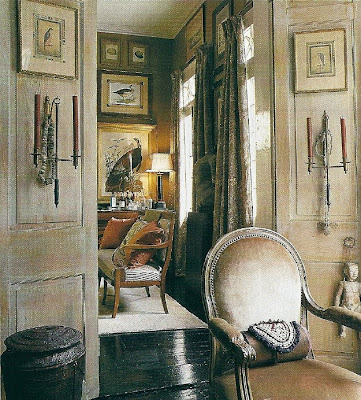 If you notice the pictures hung over the windows in the living room and how far up on the opposite wall the pictures go up it’ll give you a sense of how high the ceilings are, usually 14’ in height. 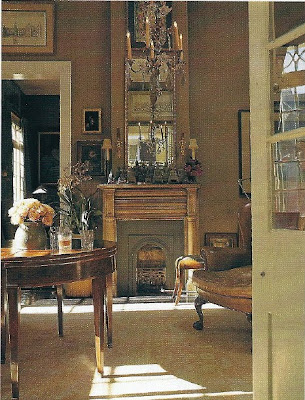 Chimneys tended to be built in the interior so the front and middle rooms could share a chimney and each have a fireplace. Notice how slender the fireplace surround is, not much wider then the antique trumeau mirror above it. Typically there was another chimney built in the kitchen. 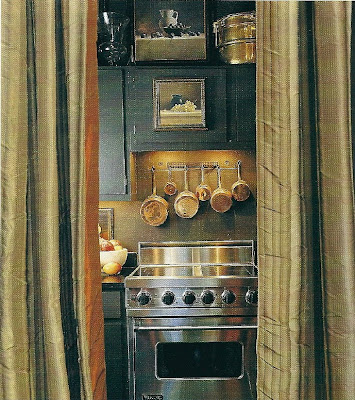 The kitchen, located at the very back of the house, looks to be a simple gallery kitchen hidden behind silk drapes. This is a man who obviously doesn't cook much since those drapes would get ruined by cooking grease. 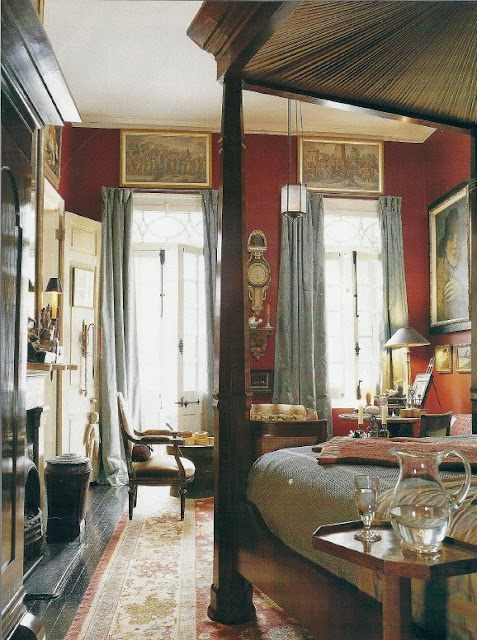 If you click on Gerald’ bedroom picture you can pull it up bigger to see how narrow the bedroom looks and how high the ceilings are, the ceilings do have cove molding. Notice how he kept the wood floors dark so that they almost disappear? 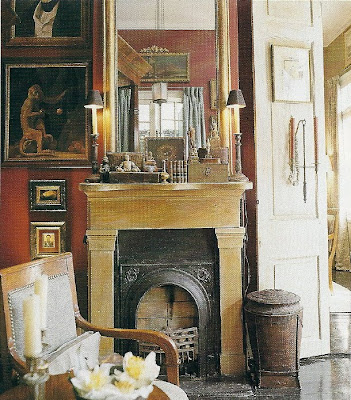 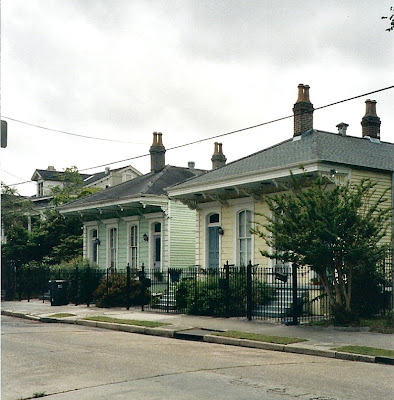 While I love the look and the idea about these little houses I don’t think I could live in one since I get claustrophobic. Love the tall floor to ceiling windows and the ceiling heights, so European. I’m also thinking these homes are best for a single person since there isn’t much square footage. They’re such a charming part of our architectural history and I’m glad I got to see so many first hand with my best friend.
Posted by Acquired Objects at 2:53 AM

Hello D,
I just joined as a follower of your blog and will add it to my blogroll-love your ideas and what you share. thank you for inspiring us. warm wishes Colette ~Afrique du Sud

Thanks for the tour, I've never been there and can't wait to go!

I have always loved a shotgun house- they are so romantic for some reason! This was a wonderfully informative post.
I think it is so special that you and your dear friend meet up like this. which city is next?!
best,
joan

I could live in those beautiful houses, since the ceilings are high. What a great post, I share your affinity for architectural and design dna and research. I agree, the dark floors make them disappear, like dark ceilings in industrial space when ventilation and mechanics are exposed. I think small houses are the most challenging, so when done successfully they are brilliant.
Best,
Liz

I am yet to visit New Orleans, however, i would so love to. These images just validated my wish even more.Happy weekend. xx

I've never been to New Orleans but these pictures are just beautiful. I hop that not too much of this wonderful part of town was ruined by Katrina
Sharon

Merci beaucoup for such an interesting tour, I loved them all.

They are so cute and I am sure that they are easy to clean says the girl who has just spend most of Saturday cleaning :-)

Such fun getting together with great girlfriends for trips like this. I had never been there myself until a couple of years ago...my daughter and I visited and I too was fascinated with these small homes but found many larger ones that I would rather actually live in!

It was so fun to see these little shot gun houses. They are so quaint. I am with you, to claustrophobic to live in one but what a wonderful studio they would make

I HAVE NEVER BEEN TO N.O.AND I KNOW I WOULD LOVE IT. ONE DAY... LOVE THIS POST! MERCI.

I adore the charm of a New Orleans shotgun house...would love one as a "getaway"!!

Oh quite the contrary! I live in one and they actually are quite spacious. It is the lack of hallways that make them seem smaller. A side-hall cottage or 3-bay would be best if you require hallways. Great post.