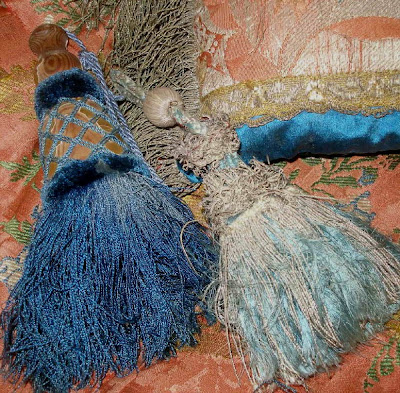 French silk tassels, left is 18th century with chipped gilt header, the right 17th century
I thought I would show you one of the items I collect and being an antique textile dealer with a love of anything European this item was a natural for me, the tassel. Textiles sometimes come to me bearing only one tassel the other long lost through the ages. Since items look lopsided with only one tassel attached it wasn’t long before I had a collection. 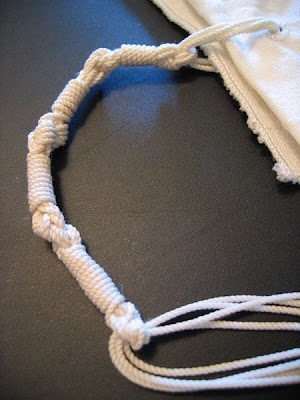 Tassels have a long and varied history, Jesus had tassels called Tzitzit, like the one above, on the four corners of his garment or shawl. While Charles X, King of France, 1824-30, wore tassels as an embellishment. 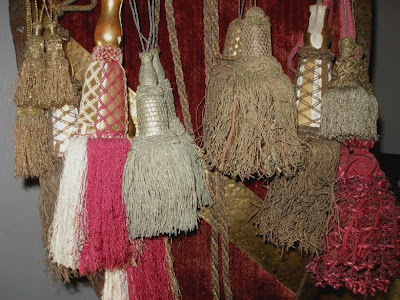 Array of 18th and 19th century silk and metal tassels
Who could resist them with their pure silk and metal thread that has been turned, trimmed and knotted onto gilt wooden headers. Amass they can really make a decorative statement! 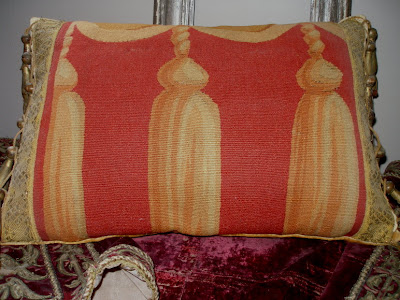 
It wasn’t long before anything depicting a tassel was catching my eye. Tassels have been woven into tapestries..... (love this orange!) 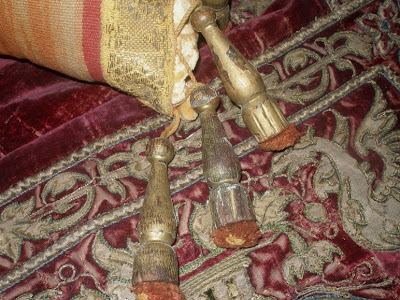 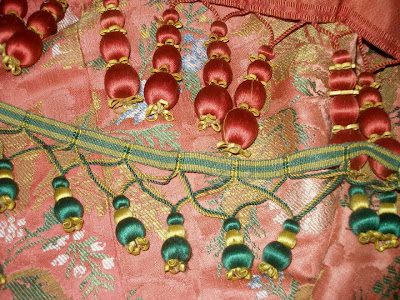 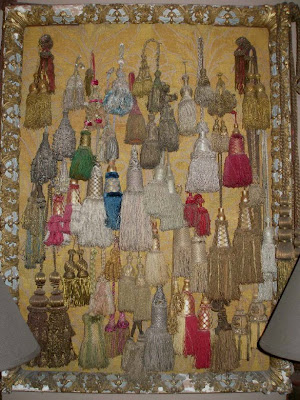 used as art work, my tassel board holding assorted tassels within an antique frame. 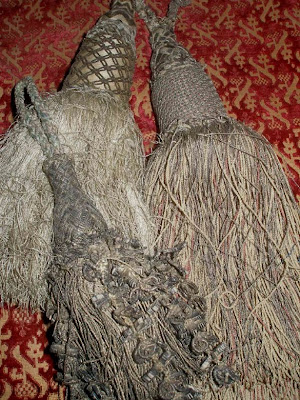 17th century French tassels
Most of these elaborate artistic tassels can be assumed to be French since the French widely exported their trimmings and tassels known as “Passementerie” at a very low cost that no other nation ever developed a “trimmings” industry. Both American and European artists, who charge up to $1000 for a single handmade tassel, are now copying antique tassels. 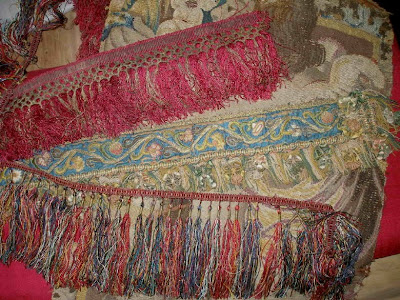 18th century French silk trims
My tassel habit became so bad I needed more of a fix that led me to fringes! Fringes with silk, fringes with metal thread, and of course fringes with tassels! 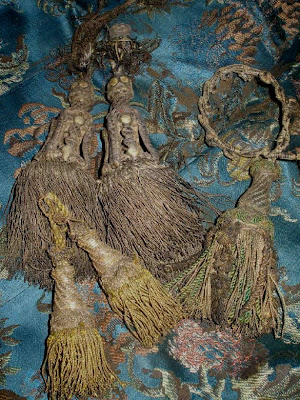 The quintessential piece of artwork! 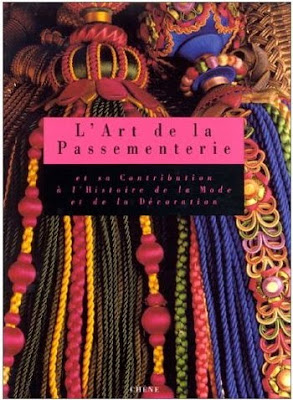 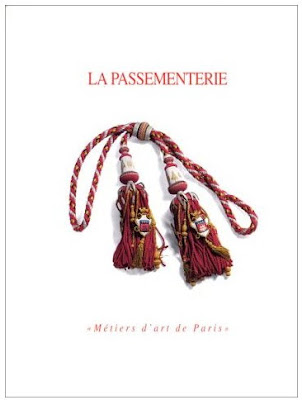 La Passementerie here
Now it's your turn, what do you collect?
Posted by Acquired Objects at 3:27 PM

I love all those tassels. You have an incredible collection!
I am a big fan of them and have tassels and fringes on the curtains of my living room and dining room. For me they are pure elegance.
Unfortunately, I don't collect anything. I really would love to start a collection of some sort. I am glad you made me think of this. thank you!

Thank you for your kind comment... You are right, I should start an Hermès box collection, what a great idea .... I will do one little box a year : )

I've always loved tassels. They certainly add an air of opulence to a piece. It was also great to read about their history. Great post and quite informative too!

I love tassels! I have a couple of vintage tassels, not as old as yours. I collect antique mirrors, just posted about it. One mirror has a tassel in the bottom of it,

The tassel on the mirror was such a whimsical element, I bought the mirror.

Thank you for a wonderful article, I love all of your posts!

Never met a tassel I didn't like...and your collection is outstanding. I love the way you display part of the collection in that beautiful frame.

What an amazing collection to have!

beauties! I especially love those wood carved pieces and the french tassles. thank you so much for giving us a look at those!

I love to hang a cute tassel off a chest of drawers.

Just found you, through Eddie. Love the tassels, I am a collector of them as well from my textile days.

OMG... these Tassels and Trims have my Heart racing!!!

Love the tassels. We once attended a presentation given by one of the designers from Scalamandre. He showed off some of the tassels they had created or re-created for clients. Some small, some large and some absolutely humongous! All were beautiful, like yours. Thanks for the post.

Georgia-I've just found you through Pinterest and am thrilled to have discovered a kindred spirit! I have been collecting antique textiles for thirty years and have been restoring them for twenty years, mostly for the Church. I love 18th century woven silks and have collected many vestments of the period as well as a huge assortment of fabrics dating from the 14th century to the present day. I love fabric!