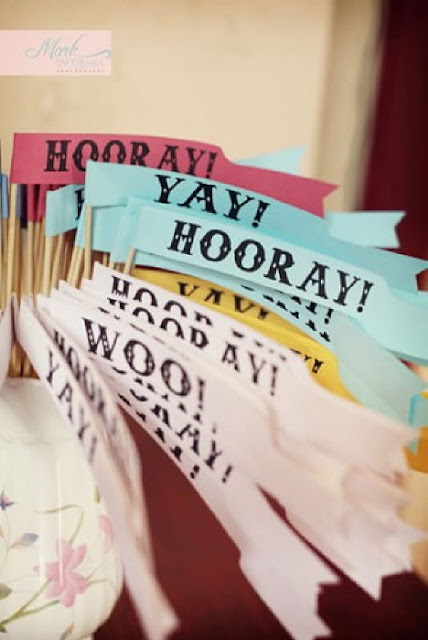 Welcome to my 100th POST! I honestly had no idea I had this much to say but don’t ask mister man’s opinion please....;)

I didn’t even think to tell you this on my last post but for all of you who think I’m an impressive cook not cooking the same thing more then twice this year….don’t, I’m not that impressive mainly because I only cook twice a week and that doesn’t add up to that many meals. Mister man is in NYC a lot during the week and I don't really cook for myself. I don’t cook the same thing because I forget to save recipes that I’ve found on the computer or I’ve tossed out a recipe I’ve printed up thinking I would remember where to find it…NOT! What was I thinking I’m menopausal I have no memory and can’t remember my name half the time let alone where I found a recipe…jeez.  So don’t be impressed! 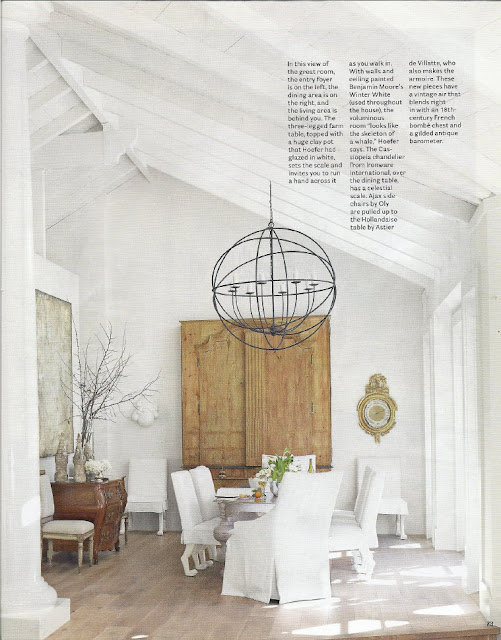 I have to ask “what the heck is up with the animal leg/foot craze lately?” Yes I know using bits of animal form has been around for centuries but lately every time I open a magazine there’s another leg. I’m sorry, personal opinion here, but not liking these chairs in the least the legs seem off in this stunning room, love everything else in this room, those doors and barometer are to die for! 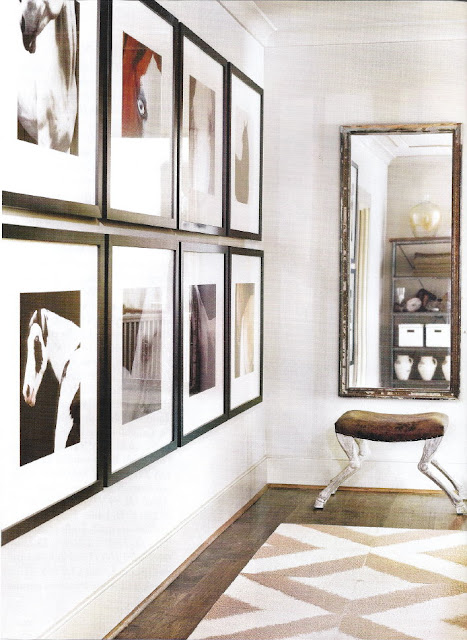 I like the looks of the seat on this bench and yes the bench works with the horse prints but the legs look as if they’ll splay out if you sit on it. 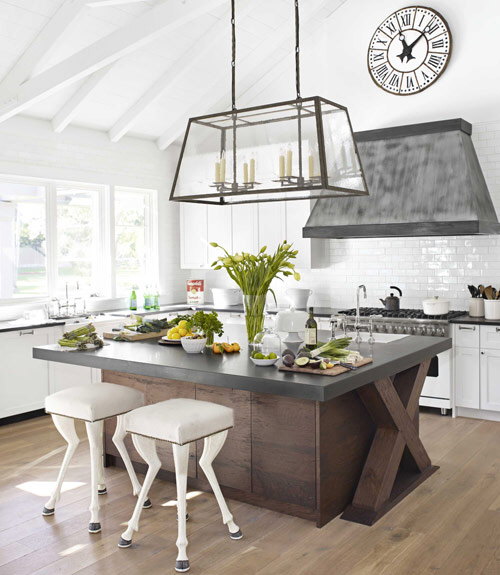 A little something for me to trip over! 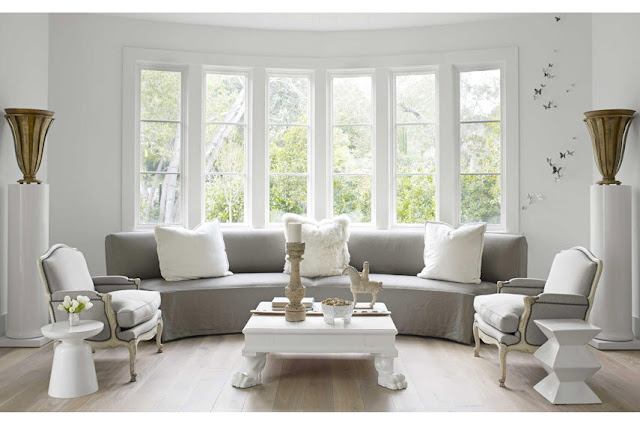 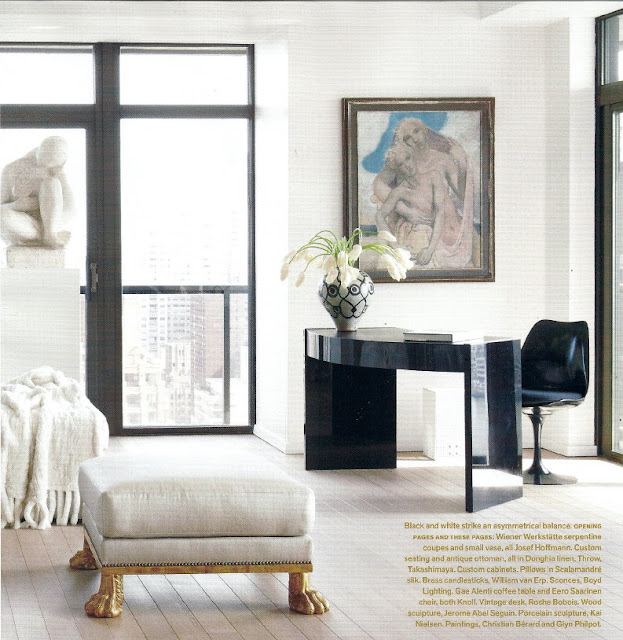 Love this ottoman and while I know they were going for a shot of glam, some zing, with the gold I would have made the feet dark.
Honestly there's something about the feet on this ottoman that reminds me of Dylan dog, he stands broad when he's being tough. 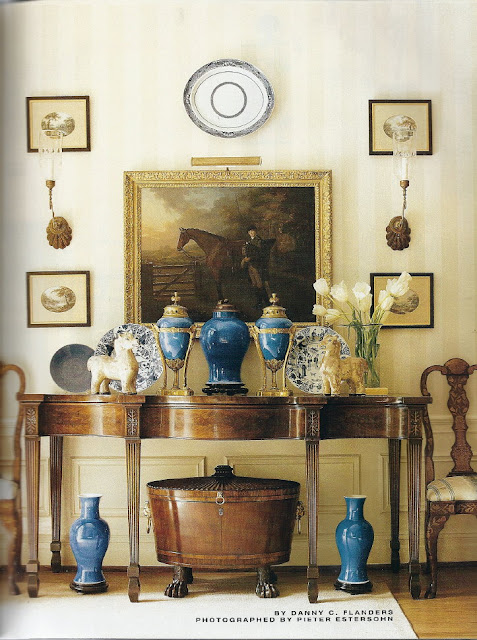 Done right but then again this cooler is an antique. 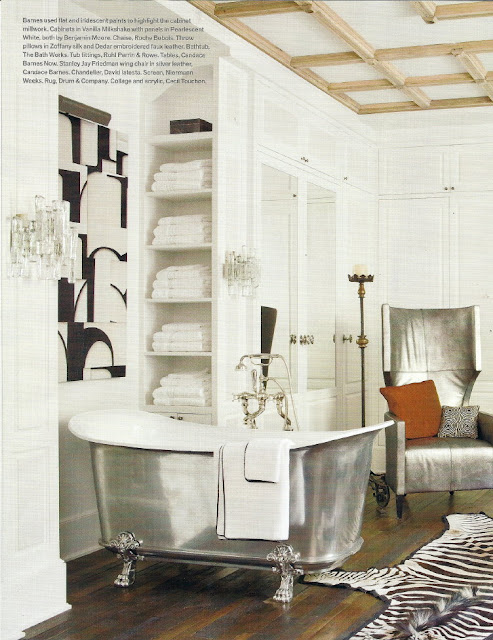 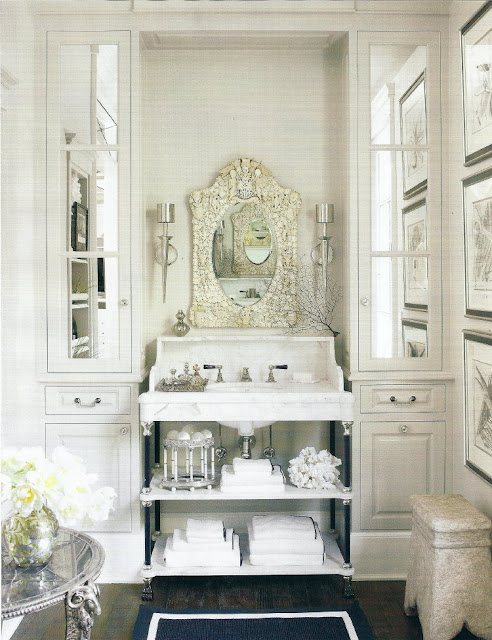 
I've never seen animal feet on a sink pedestal but I'm loving this. 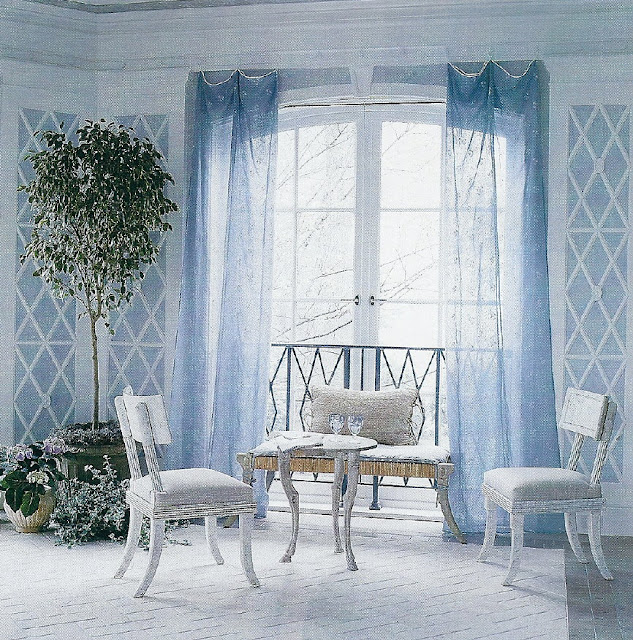 Even eight years ago they were mucking around with animal legs but it seems to work in this setting. 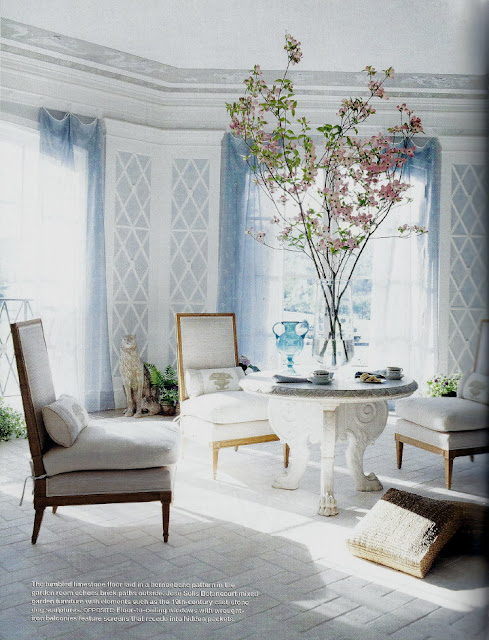 While not my personal taste I think this table was done right. 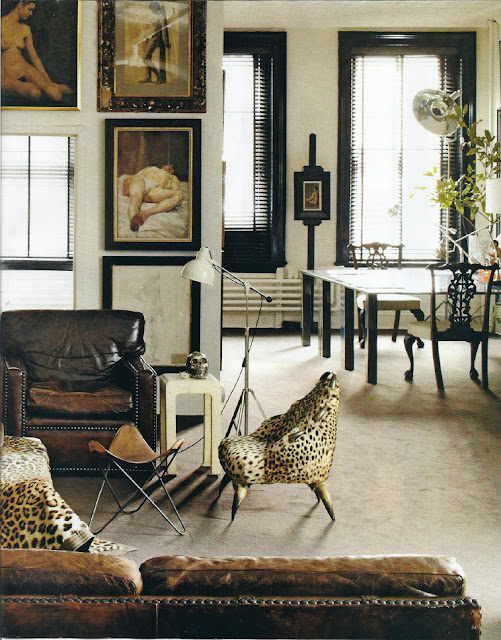 Don't even get me started on the number of chairs I've seen with horns, can you imagine what those points are doing to that rug? Let alone if someone drops into that chair and it slides?

So tell me the truth do you like animal legs on furniture or not, I promise not to judge....;)

Posted by Acquired Objects at 10:45 AM

ha! I had noticed a few of these but not this many! I'm not sure I'm a fan - but I could see maybe one piece with "feet" to make a room sing...donna

First of all congratulations on 100 posts - a milestone! Secondly, apart from claw foot bathtubs, I don't think I've ever encountered an animal foot piece of furniture, but I'm very impressed with the collection of photos you put together!

First congrats on 100 posts!! Wising you many many more happy blogging celebations and milestones.........

Now onto these animal feet, I am soooo with you, actually find it a bit creepy truth be told. The only one I can make an exception for is the beautiful room and furnishings in the Southern Accents 2004 picture other than that, do not like the look and would most certainly never buy it, timeless it is not.

Congratulations! I've missed your last post , number 99 ! I will read it as soon as possible ;-)

Animal legs on furniture are digusting. The other legs look ill! But the lamp on the first photo is nice. Good night, Nik

Wow - I had absolutely no idea when I hit 100 but it's obviously passed - congrats to you!! And I agree with every single one of your assessments!!

How bizarre! I notice these occasionally but I have to admit that seeing so many in one place- kind of creepy.

Congrats, Deb, on your 100th post! I'm still so impressed that you get up so early every morning. How do you do it?
Deb

You crack me up!!! I 100% agree with you on the animal legs... I can't stand them!! I don't like horns or any type of animal anything in a room. It has been so nice to hear that you agree! I have kept this a little secret of mine;) You have such a keen eye and I love all you posts... congrats on you 100th post!
Thank you so much for your sweet comment today!

I'm not so crazy about the animal foot trend but oooh do I love that silver bathtub!! I could use a little relaxation in there about now!
xo
Sharon

I'm a little afraid to admit it here, but I always thought that chair legs and table legs were often inspired by animal legs. What about the classic Ball and Claw that you see on Chippendale chairs? I guess I'm in the camp that thinks it's okay when it's done well. (Maybe I should just stick to lighting)

When we were in Jackson Hole recently we saw our share of antler stuff. The Elk shed their antlers every year so there are plenty of them around.

All the best, Cindy

Whoohoo!! 100!! Congratulations Debra! And this post made me laugh several times--a great gift for us, from you!

Congratulations! 100 post, I can not imagine. That seems so far off for us. The animal thing. I don't mind it. In some rooms it adds a bit of fun. I have to admit when you see them all lined up here, it is a bit odd looking.

that coffee table in house beautiful is the worst. i have seen some horn furniture that defies description!

Congratulations, Debra.
I happen to like animal feet when they are done in proper proportion. I have an antique pedestal dining table with claw feet that is beautiful in my eyes. I like claw foot tubs and delicate metal claw feet like the ones on that super vanity. I have seen antique chairs with horn legs and arms that are fabulous. I think it is all about proportion.

Most of the ones you pictured, especially the chairs in the first image don't work for me because they are awkward and clunky and out of proportion to the rest of the piece. The stools in the second image are definitely trippers, but that lantern over the island is fantastic. I digress.
Best...Victoria

Now I am going to be seeing animal legs everywhere!! The horse ones are the worst...hopefully that trend will go away soon!
xo
Caroline

I like it as a subtle detail but when it gets bigger I must admit I find it a little creepy! :)

i'll pass on the animal leggy furniture but there is so much else to admire in the images you have posted.

you're humor is never lost on me! love it!

Just said that I agree with Cindy...and you!

You're so funny! Thank yo for the laugh tis morning!!!

I would NEVER use something like that in my house. NO way! It's ridiculous. That's simply that! I'm sorry, but this is just a waste of money. Pieces like these are often found in garage sales in a couple of years and guess what we do? We laugh at them! "How could someone buy such a thing"? :-)


Have a blessed weekend.

Congratulations on your 100th post!! Thanks for all the inspiration you give!
Happy Halloween weekend.
xo E + J

Congratulations Debra on the 100th post! I am still a rookie, but must thank you for stopping by and leaving a comment. I have been visiting you for some time and love your blog, also found through Trouvais! Not a hoof and foot person either, best left on the dear little creatures. I prefer Louis 15th and 16th legs. N.xo

I think it all just depends...I agreed with every word of your commentary...I would love to have that antique cooler..and then there are very few really old wonderful things that I wouldn't love to have. XO, Mona

Congrats on your 100th post! That's fantastic! I celebrated mine as well...
Also, I have been terrible about visiting all my favorite blogs and am catching up... and I couldn't wait to tell you I LOVE your header! I love the photos you chose, and I see you used picnik! It looks beautiful...
Congrats
Jan

Congratulations on your 100 post.
Horse leg chairs, Hm, not to crazy about it, on one of the markets in the south of France is there a Italian dealer that always some kind of hoof legged chairs or stools. they always catch my eye, but thats about it. I guess conversation pieces .
Up to the 200 celebration
Johan

hello,
I love furniture with animal legs. But, the small seat with the horns is not really my taste.
And Congralutations on your 100th post. Now you go for the next 100?

Congtratulations on the 100th post..time flies when you are having fun. I get what you are saying about the animal feet craze..the line has to be drawn somewhere and personally I do not find them appealing. Great pics!

I seemed to miss this post, so belated congrats on your 100th lovely post! I am with you on the animal legs thing. I love everything about that first room but those chair legs totally spoil it for me! What were they thinking!?! x Sharon