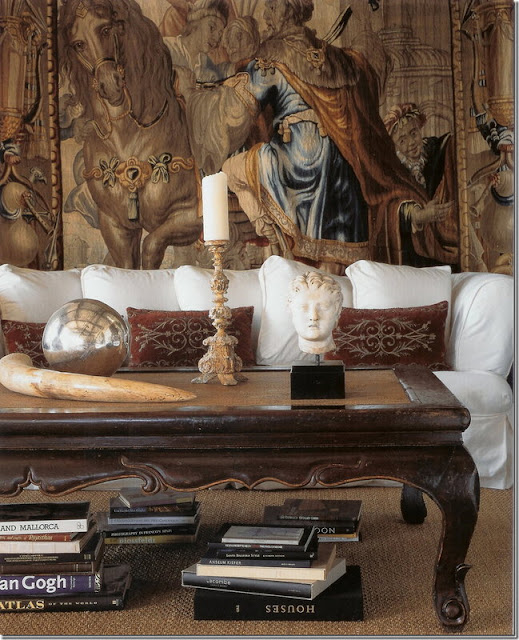 It’s no secret I’m an antique textile dealer and as such I have a certain fondness for tapestries. Tapestries used as backdrops help to add a focal point where there might not be one and creates the illusion of height. Tapestries help to visually expand a space bringing the eye all the up to the ceiling. 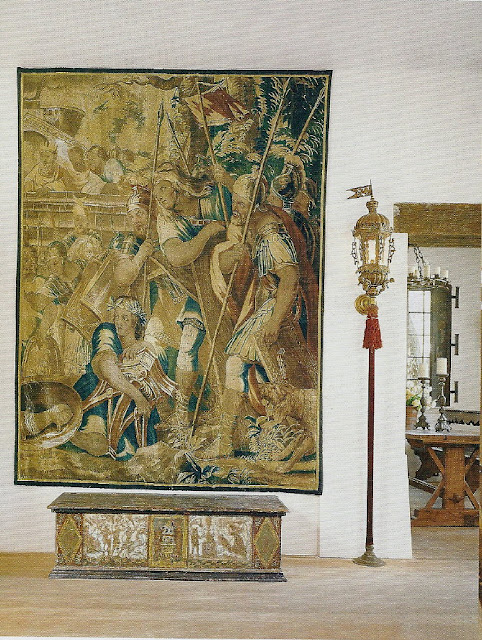 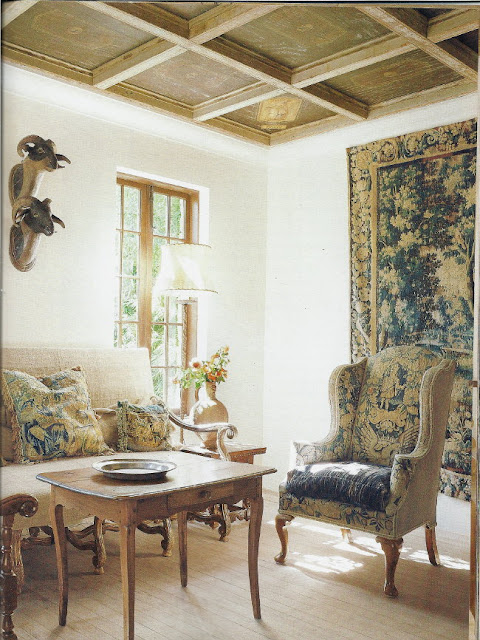 In the middle ages tapestries had a purely utilitarian function. They were originally designed to protect medieval rooms from damp and cold weather and to cover and decorate austere walls of castles. Because the tapestries were enormous in size during the time period most you see today are mere fragments. Tapestries were huge investments as thus were displays of wealth and power, still sort of are today since even fragments can cost thousands of dollars 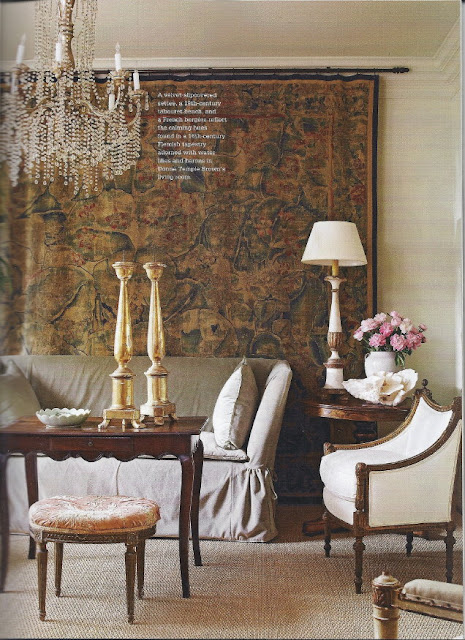 Production was centered around Paris until the Hundred Years War (1337—1453) caused the weavers to flee north and by 1500, Flanders, especially Brussels and Bruges, had become the chief places of production. Tapestries became beside painting, sculpture and architecture one of the major visual art forms. 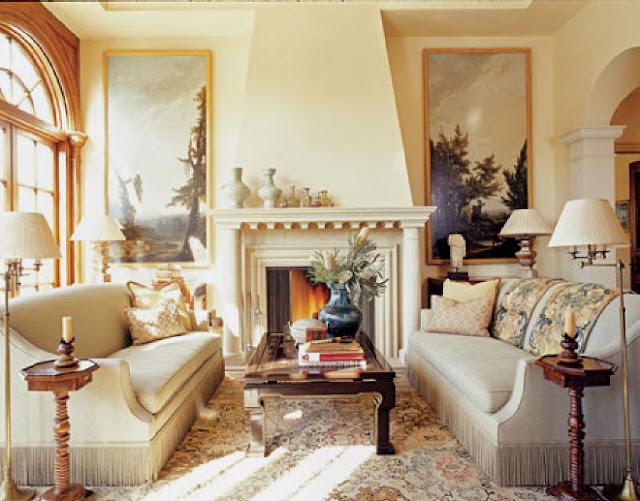 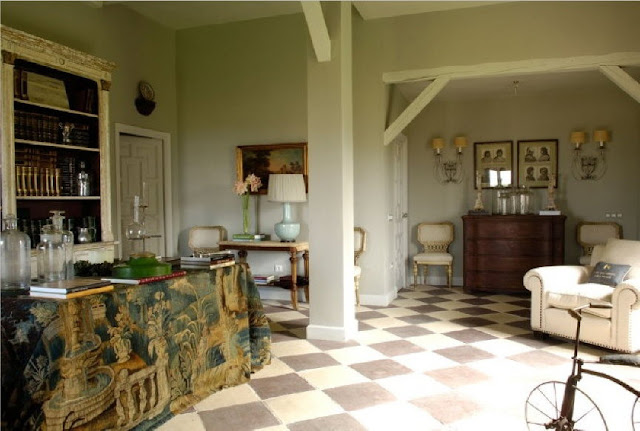 With a little imagination tapestries can be used in a variety of ways besides pillows and upholstery. They look wonderful draped over the back of a sofa, seldom used of course. I’m not so sure I would use a very old and expensive tapestry in this fashion draped over a table with items on it as it breaks down the silk and wool threads, please don’t destroy history! 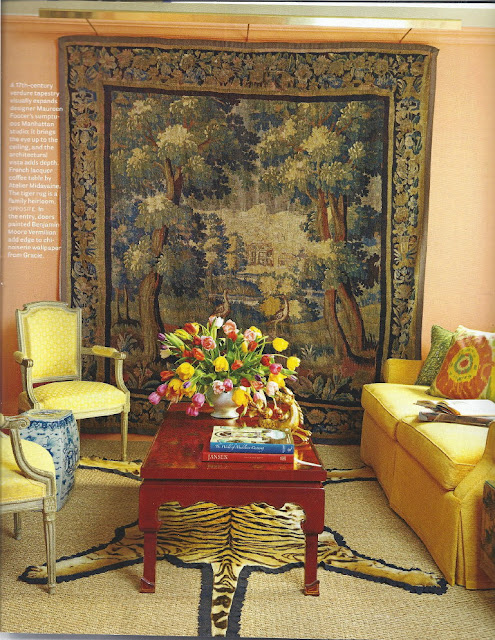 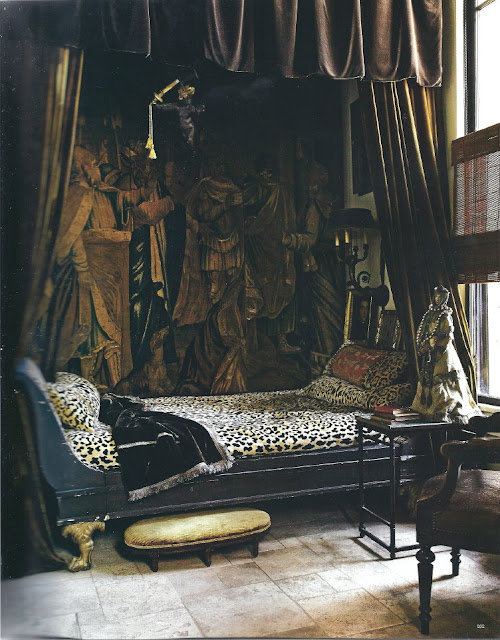 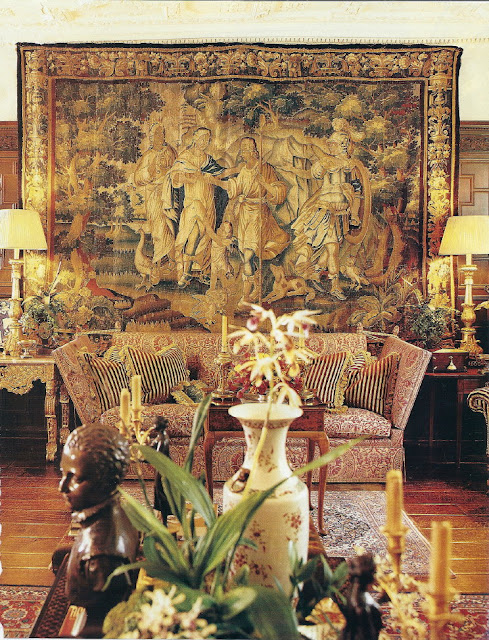 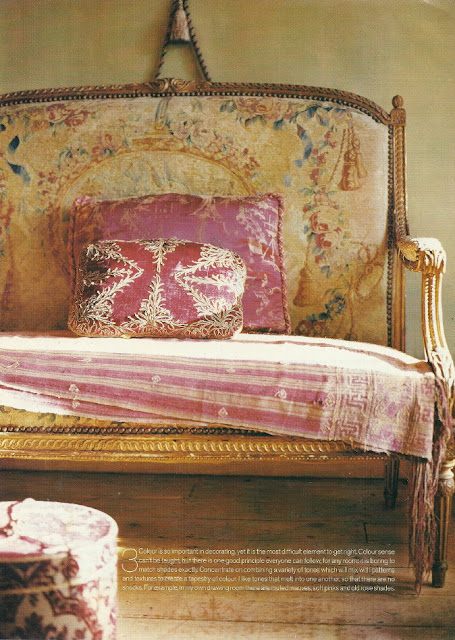 Love this look with the tapestry upholstery with antique silk velvet pillows. 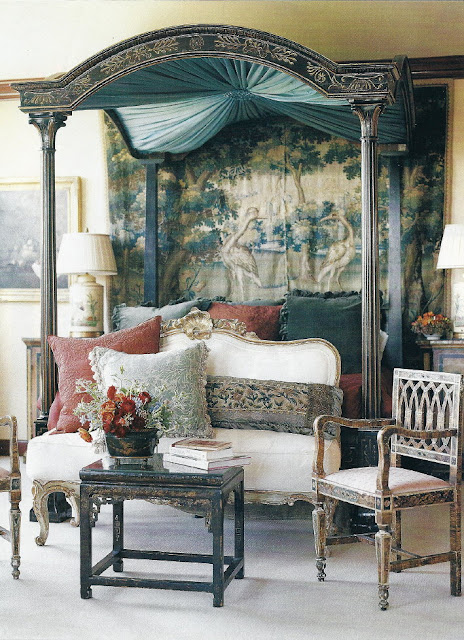 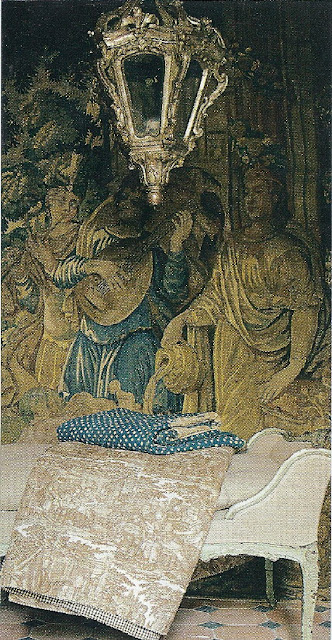 Could you get a room any more French looking? 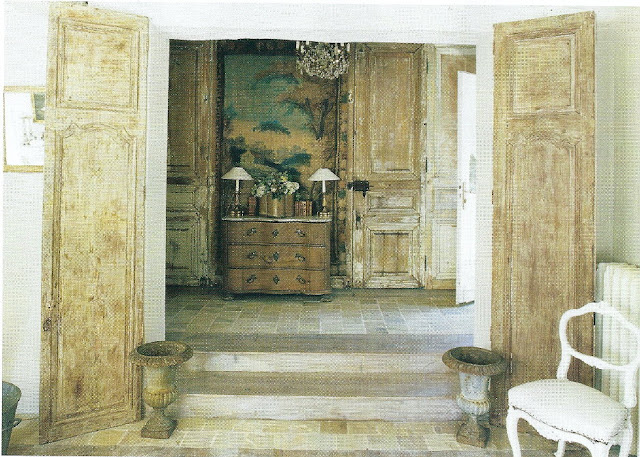 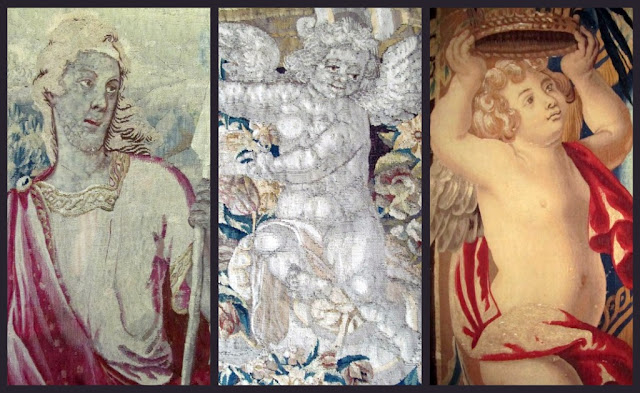 While I’ve given a simplistic history of tapestries they remain a highly prized art form for decorating a room. Remember if you’re ever in the market for a tapestry or even a fragment on a pillow I have something to please every taste.

Hey a girl's got to promote herself sometimes right? So tell me do you have any tapestries?

Posted by Acquired Objects at 8:38 AM

Hi Debra, unfortunately I do not have any tapestries, I'm afraid I can not afford them. However, I find them wonderful. Some of them I could imagine to become mine (someday...maybe...). How's Dylan-boy? Nice day to you both, Nik

beautiful post, debra. many years ago I lucked up on a lovely tapestry, not old - machine made, I suspect, but for $1 at a tag sale, I couldn't resist! yours are, of course, amazing and I enjoyed the looks of decorating around tapestries...donna

no tapestries here, and i'm not sure i've seen one in person.

hmmmmmmm. a contemporary motif for a modern tapestry: a middle aged blonde woman sitting at her kitchen counter with wide eyes gazing into a magical notebook. now THAT's romantic stuff to be preserved for centuries.

What a lovely and interesting post and such beautiful pictures. I don't have any tapestries but wish that I did! x Sharon

I love needlepoint and have many pieces in fire screens, pictures and furniture coverings. Other wise I am not a tapestry collector, but have bought and sold a number in my life. They have a certain beauty and add elegance to any room. They were originally made to keep rooms cold as they had no means of centeral heat. What a change, now they are simply decorative. Great post. Richard from My Old Historic House.

Debra I have a dream of one day finding a fabulous huge old tapestry at an estate sale for less than a fortune.....The ones I have found that I loved were nearly as much as my house *winks* The examples you've shown are beyond gorgeous! Where and how did you find your beautiful pieces? Did you just "stumble" upon them? Whatever the case those must've been some very happy days!

Your comment on my doll cracked me up! She is a little "bride of Chucky" isn't she? Lol! Now she is kinda scaring me....*winks* Vanna

I love the realy old textiles and tapestries..make my knees go wobly with excitement..so good to know I can always come to your site for a "fix" thank you Col~Afrique du Sud

I fell in love with tapestries on my first trip to Europe many years ago so you have struck a cord with me. These are such gorgeous examples!

I love this post! I have a QUESTION... I have a 100" x100"
Crewel piece wool yarns on linen, Probably was part of bed handings as it has been been sewn together. It is medium heavy. Thought to be English.
My question is this, what is this best way to hang this on the wall? A thin or a heavy pole? Would imagine the less stress on the piece would be best. Thank you for your advice.
Judith
R.judith@charter.net

You have a wonderful job! Tapestries are so decorative in a home! Do you know the tapestries of Oudenaarde and Enghien (Flanders)! I love them to!!!
You have posted the most amazing pictures here!!
I also love to see a tapestrie used as a tablecloth as you have showed you here on the picture (unknown). I do know that Axel Vervoordt loves to do that!
Thank you for this beautiful post!
Amazing!!
xx
Greet

So, so, beautiful. Thank you so much for the history lesson. You can learn so much from blogging.

Great post! I had a neighbor that used to have the most amazing tapestry and I always liked the look. It makes a room feel more serious.

Have a wonderful weekend.

NO!I have no tapastries and would KILL for one of yours!

Beautiful Debra!! And of course I love the little history! I wonder if they could have made us all sitting at computers look gracious and elegant!!

I am sorry to be late at responding Debra but I took one look at the first photo yesterday, said "Whoooaaa" and knew I had to have plenty of time to devour this. This my favorite post of yours so far! The photography is all so very beautiful and inspiring. The style really speaks to me!

Sadly no tapestries yet, they are just too far out of our price range. But one can dream, can't one? At least we have our ikats, which are nothing to sneeze at!

Oooooh Debra - you are singing one of my favorite heartsongs. I have a few fragments that are now parts of pillows, but I would love... LOVE to have one covering a wall in my little McMini by the beach. My file - huge, now I just need it to be reality.
I'd love to see your tapestries... email me! :)
xo isa

What a beautiful post! Took my breath away.....so gorgesous. My mom is begging me to find a place in the new house to hang a big tapestry...hopefully we will find one, but have to say its going to have to take a back seat to things like putting in lights and bedding...lol! These are really exquisite.....

Beautiful images!
Yes, we have a tapestry, late 17th Century, which Mr. B likes to have hanged up in the living room in winter time and around christmas. I personally think that this tapestry is too grand for our simple farmhouse, but he loves it.....

Gorgeous pictures. I will definitely keep you in mind if I come across a project where they would work.

I don't think there is anything wrong with a little self promotion.

Love this post, all the tapestries are gorgerous and I wish that I had a real old antique tapestry.

In the interim I will make do with my copies.

Debra tapestries are such unique and gorgeous works of art.

I love Deandra's and the one behind the bed in blues. They do look beautiful on a table however your words make perfect sense of course!

Oh I have a designer pillow Giveaway I hope you will join! (a great resource as well),

Almost need to avert my eyes...so much beauty! I am trying to live with the house I have! Whenever I see beautiful tapestry chairs at auction...I think of your loft...and wonder if you've seen them. LOVE that settee with the raspberry reds and golds! Thanks for your comment. XO Trish

When I made my "find" of tapestries which are now pillows around the house there were also two large 'bird' tapestries that I had made into wall hangings. They hung for a while in Dallas, but were never really right in the house. I sold them, and now wish I had them back;)
hope you're staying dry;)

Remarkably I don't have any and I do love them so! Beautiful images!

What a beautiful and informative post. I love tapestries, but do not own one...these images have me dreaming...

I love this post...the images and of course the history! I fantasize
about owning a tapestry, they are like any great art they just elevate a room!

I'm a tapestry fan! Love these photos, too - so many of them not in my inspiration files!
xo,
A

Hi enjoyed this post so much posted it on my posts to ponder today..well done!

I love the tapestry draped over that table! I'll have to copy that someday ;)

Beautiful post. I love tapestries, have one hanging over my dining room table that belonged to my grandmother. This is a very pretty post, thank you.
Glad to have found you. Am your new follower, I found you from Tina at Enchanted Home. I can see why she recommended this post!

Hi! I am here on Tina's recommendation from The Enchanted Home. So happy to "meet" you and follow your blog!

This post is gorgeous! I absolutely love tapestries. They are such a beautiful art form, and I have obtaining one on my "future" list. :)

Hi there!Are they great or are they great!Love the theme of every tapestry.The best thing about them is the mix of art and history. I personally love that a story is woven. The brought color and charm to the rooms.Oh and happy thanksgiving:)