I almost never watch TV mainly because it bores me right to sleep in under five minutes…LITERALLY! One show I discovered last year that bowls me over on Bravo on Tuesday nights is “Flipping Out” with house flipper turned back to interior designer Jeff Lewis. He’s an obsessive-compulsive neat freak/control freak who would be absolutely impossible to live with but watching him is fun. 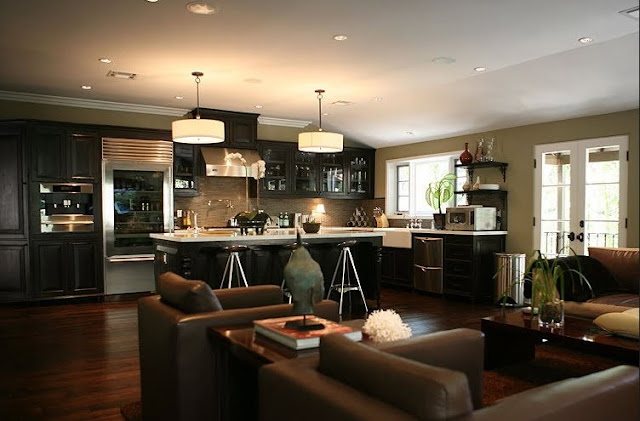 Kitchen at Valley Oak One House, Jeff's personal home until it sold
I got a little curious about his finished designs since you almost never get to see them on his show. The houses are usually under construction and the show seems to be more about Jeff’s bizarre behavior rather than his finished work. I could never have a glass refrigerator like the one pictured I would be trying to arrange the contents all the time. 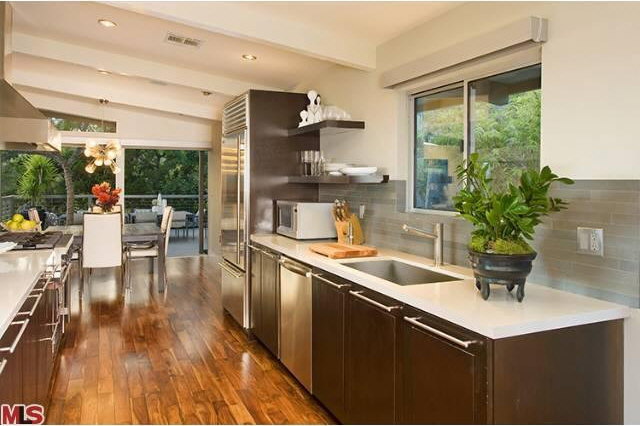 Kitchen at Valley Oak 2 House, Jeff's personal home now but for sale
I have to admit his obsessive behavior shows right down to the smallest detail. He designs are clean and open, well laid out and very contemporary, he says his designs are "California Modern" and I'll agree. I know from watching the show Jeff prefers open shelves in place of upper cabinets.

Commonwealth Kitchen by Jeff Lewis
While those open shelves look nice they show Jeff doesn’t cook. Those shelves don’t hold much and people who cook need their stuff. Plus what happens to all that stuff out in the open from cooking grease, the dust? I know I don’t want to be cleaning something when I don’t need too. 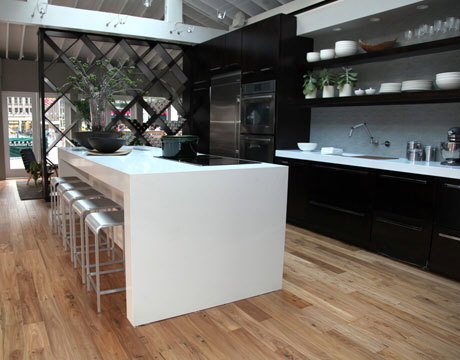 House Beautiful Kitchen of the Year 2010 by Jeff Lewis 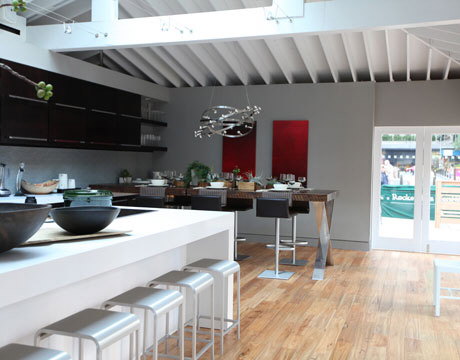 House Beautiful Kitchen of the Year 2010, the other half of the kitchen
I love this kitchen! Tons of gourmet cook conveniences, nice clean lines with an eating area and sitting area all combined. The only thing I would change is the dining table since I prefer something lower and more intimate when having guests. Love the shot of red in the dining area, every room needs one little surprise.

House at Edgemont, LOVE the gray paint color and how warm this room looks!

Edgemont Living room by Jeff Lewis
Perhaps it's just me but what is up with everyone placing the flat screen TV above the fireplace? I thought the fireplace WAS the focal point of the room and the TV with its size takes away from it. Love this room otherwise! 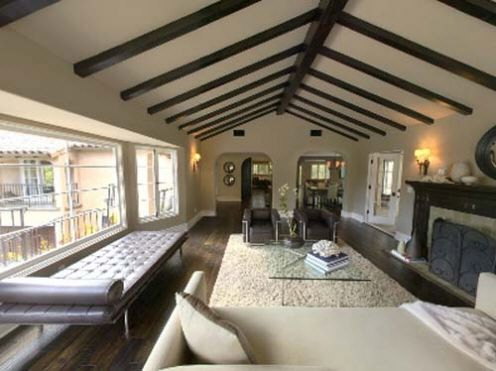 While this living room is masculine looking it's stunning and so clean. While I think this guy is an absolute riot he's also a wonderful designer, shame Bravo doesn't show a little more of his finished designs. What do you think?
Posted by Acquired Objects at 12:40 PM

I feel the same way as you...
not a big fan of open shelf kitchens (I always wonder who cleans the dust from the dishes!)
and not a big fan of flat screen TV showing in the main rooms (would rather a beautiful mirror)

beautiful kitchens but a bit modern for my taste... I like a more rustic feel

It's always a pleasure to read your post! Thank you!

Sorry to admit my ignorance, but I'm afraid I didn't know about Jeff Lewis. I love the first shot, could definitely see myself in that kitchen while people are milling around and relaxing on the big arm chairs.
With you on the flat screen, I even think it'd give a crick in the neck watching up high like that. We have a painting over the fireplace in our living room - more restful!
Sharon
My French Country Home

Hi! Love your blog! I started one myself, that I think you'll love!! Please stop by! Take care, Ms. CotedeVelvetGreige xoxo

Very clean and nice. Not really my style, but can totally appreciate it.

What is the wall color of the Edgemont Living room, picture #7?