When we bought our 18th century home fourteen years ago never in my wildest imagination did I think it would take so long to remodel my kitchen. Being both a Yankee and a New Englander we don’t believe in waste and using things until they literally fall apart. I hated my kitchen and nearly dropped to my knees in thanks when my stove finally became a fire hazard. So when the husband said lets remodel the kitchen images of grandeur floated through my head…….. 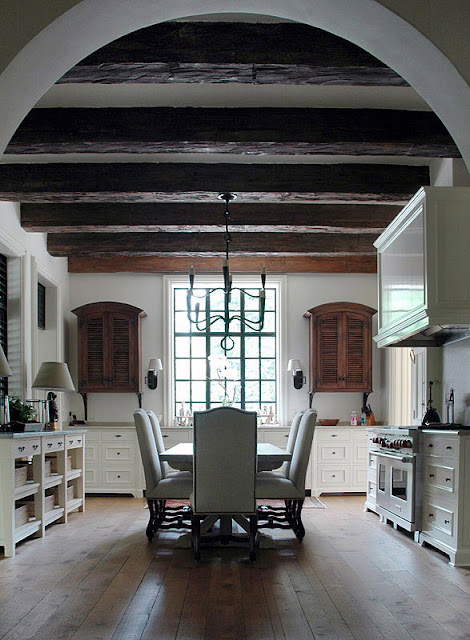 I dreamed of high ceilings and clean open spaces…….image via Bill Litchfield 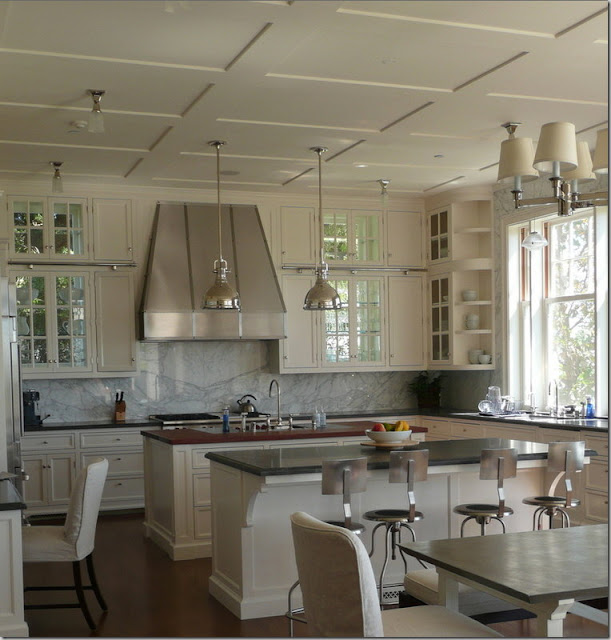 I dreamed of tons of cabinet space and seating area....image via Steve Giannetti, Brooke's husband, from Velvet & Linen (I'm in love with this kitchen just move it into my house please!)
I dreamed of large windows with lots of natural light.......image via Belgian Pearls 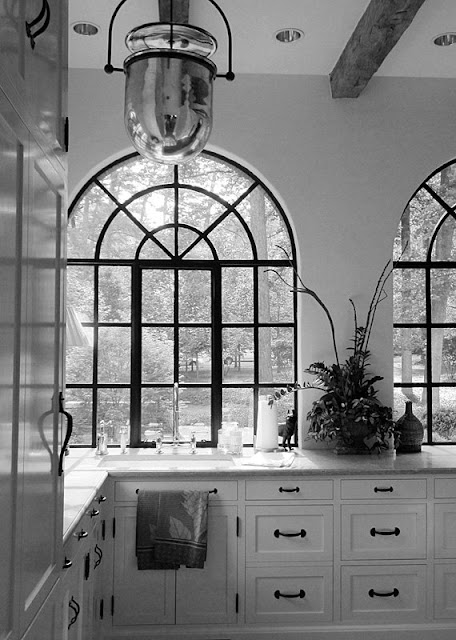 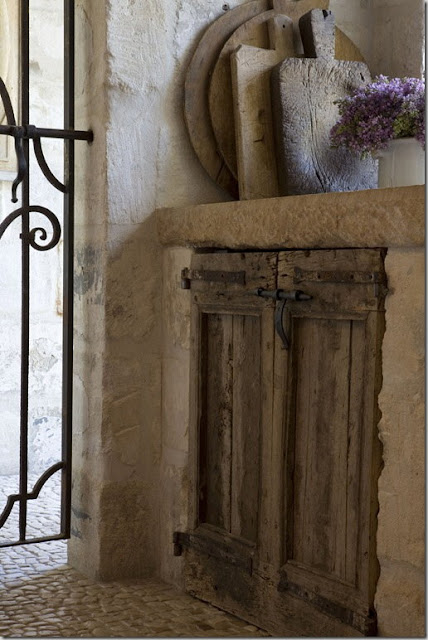 I dreamed of using natural materials.......image via Chateau Domingue 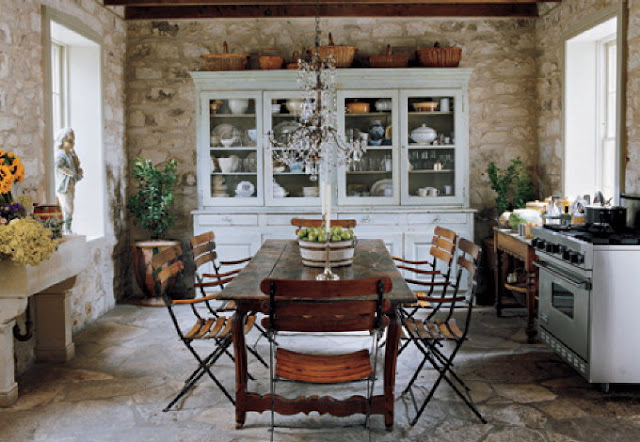 I dreamed of using stone........image via Cote de Texas 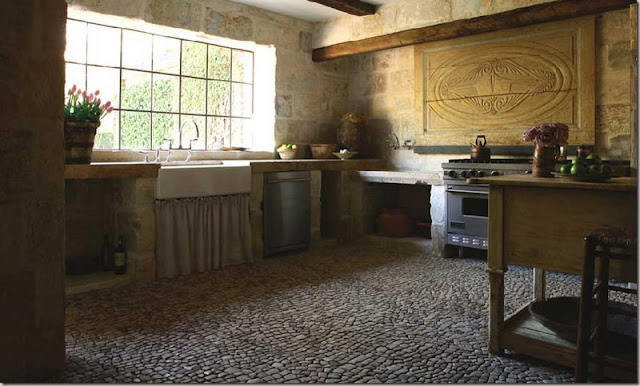 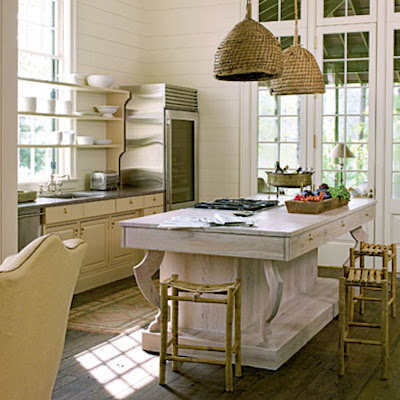 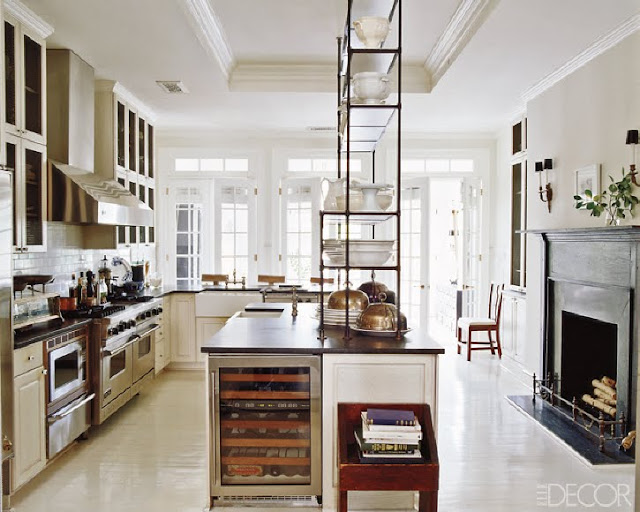 I dreamed of stainless steel appliances........image via Darryl Carter, love, LOVE this kitchen!
But then reality crept into my world and my dream bubble popped and I was faced with the kitchen from my nightmares! The reality is I have a kitchen that’s only 16’ x 14’, a whole 224 square feet with 8’ 2” ceilings, the lowest ceiling height that could be found in my house. It’s one of those quirks of an 18th century house. 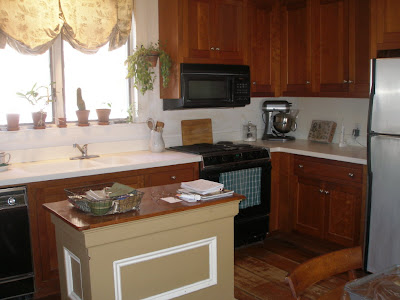 The kitchen did have semi custom built cabinets and corian counters but it had a lot of issues. White counter tops are not my thing, neither is an electric stove with only two burners. No back splash around the sink or the stove. The microwave above the stove would get really hot when I cooked, it being digital you can imagine how well it worked after a few shots of heat. That refrigerator couldn’t hold the makings for a Thanksgiving meal. The faucet had this annoying drip for years on end let alone it didn't reach into the middle of the sink just that one little corner and no sprayer!
The floors were badly worn, wood floors should never be allowed in a hard working kitchen. We made the mistake of using our kitchen as a giant crate for our brand new puppy and he choose to do a little decorating himself…..look at the wall…nice huh? Sheet rock paper ripped off and the sheet rock and baseboards chewed. DO NOT USE YOUR KITCHEN AS A PUPPY CRATE! And I hated the country look but felt tied to it for some reason. Probably because of the elements in the kitchen felt so country. I had a few restrictions when it came to designing my new kitchen…….I wasn’t allowed to bump walls out in hopes of gaining space, the kitchen is not as wide as my house and I could have gained ten feet in width had I moved those walls. Since we have harsh cold winters we had to have a wood stove for warmth. I wasn’t allowed to change the windows out since they were original to the house and not drafty believe it or not. And our Golden Dylan needed his area. Other then that I had a free hand and boy was I excited!
Posted by Acquired Objects at 8:18 AM

How exciting! A kitchen renovation! I abolutely love the 1st kitchen... the ceiling, chandelier, cabinets... Elle est magnifique!
Hope you'll have fun designing your kitchen. Can't wait to see the process and the end result!

your inspiration photos are stunning !!! I don't know which one is my favorite!

I love your Yankee frugality. Have a grandparents were Northern Italian immigrants and my parents vividly remember the great depression frugality. My sister and I used to scoff at my mother's saving of plastic containers to reuse...and now we do the same (great for paint mixing!!).All your inspiration photos are yummy. It's like one of those super challenging Mensa grade puzzles. "Challenge level high". How exciting...can't wait to see how you navigated through all your constraints. Nimbly, no doubt! XO Trish

I love your kitchen ideas and inspiration photos. More often than not, we old home owners, are limited by our homes design (and by our budgets). It makes it difficult to create perfect spaces, so we create almost perfect ones. I love your attitude though!! Great job!
xx-Gina

Kitchen Renovation, How exciting!!
I love the first and the second photo of your inspiration. Can't wait to see the result.

I don't even "cook" that much anymore (well, for US, anyway...we're more salad & grilled fish or meat these days), annnnd, I know alot of our friends are that way too now (more health conscious as we're ~ EEKS!~ "getting older"!!! )....

So, it seems NATURAL to me to be "CURIOUS/INTERESTED" as to W*H*Y "OUR kitchens" are SOOOOOOO VERRRRY IMPORTANT to ALLLLL of us, even IF we AREN'T cooking like Martha anymore!

...I can only GUESS/ASSUME it's because THAT'S where all of our loved ones gather... no matter HOW big the rest of the home is or is not!!!

Our custom home is now 6 years old and *I* just had ALOT "redone"... am soooooo thrilled with it, and maybe THAT'S what it's truly all "about"~~~~ reeeeally and truuuuly loving every inch of your castle OR cottage!!!

Warmest holidays hugs to ALL,
Linda in AZ *
bellesmom1234@comcast.net

Ok so when are you going to come and design away my galley kitchen? I am ready to just move everything into the driveway and cook from there...