Michael Trapp is on the Move!

While perusing the Internet looking for a certain antique item for my new kitchen I remembered Michael Trapp Antiques and web site Here . While browsing his pages I had a look at his profile and was very surprised to find a little box right below his picture. Michael Trapp is a garden and interior designer extraordinaire, theatrical designer, antiques dealer, and trendsetter, who is well known on the east coast, is selling his amazing home in Sharon, Connecticut. 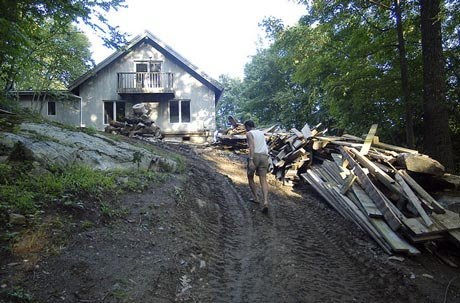 View of the house before renovation
Perched on the edge of a cliff with spectacular views of the Berkshires foothills sat an unassuming 3000 square foot bungalow style house that Michael purchased for $365,000 in 2003 and set about creating a little magic. 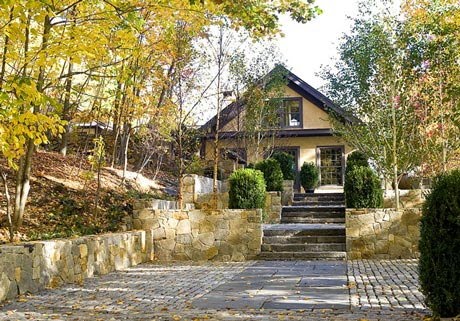 View of the house after renovation with landscaping, stonewalls, steps and cobblestone walkway. Notice the color of the house and trim. 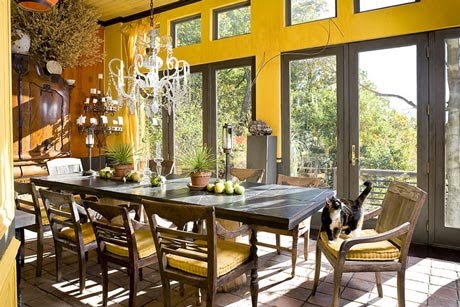 View of the dining room, notice the wall color, with a 19th century Spanish chandelier, the teak chairs are sold on his web site. The dining room and living room face out to the deck so the windows and French doors were all elongated to capture the view. 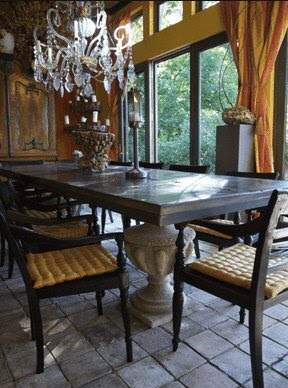 The antique French limestone table base and the fabulous 18th century flooring from Burgundy are all available on Michaels' web site. 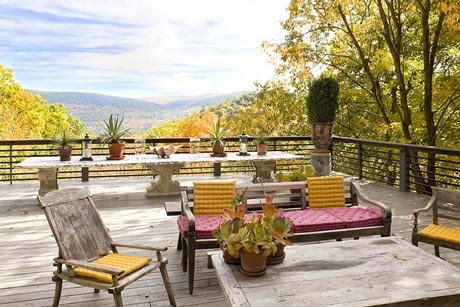 The 900 square foot deck that runs the length of the house brings those captivating views home! This picture was obviously taken in the fall since the leaves are changing. Now do you understand why someone with so much talent bought such a house? 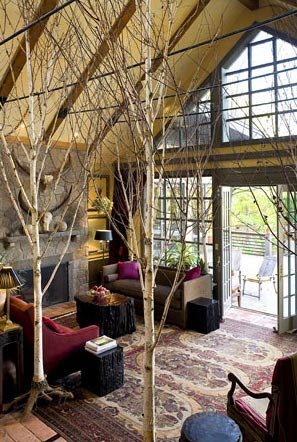 The living room is outfitted with eight dead birch trees, while an unusual decorating statement inside they would have been worse outside for a garden designer. Upon arriving for the front yard Michael found they were diseased and dying so he brought them inside. The living room is bigger in height then width so he needed something to make the scale more human like without blocking the light coming inside. 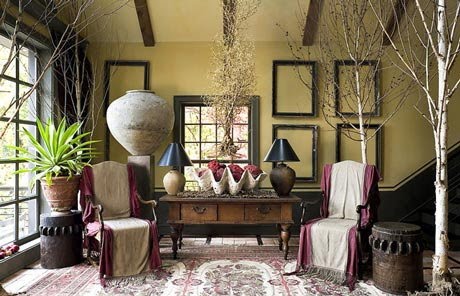 The other side of the living room noticed how Michael used black paint to mimic wainscoting on the lower half of the walls. He has another variety of tree hanging above the large clam shell, an orange tree. I love all the antique frames on the wall, sometimes they make more of a statement empty. 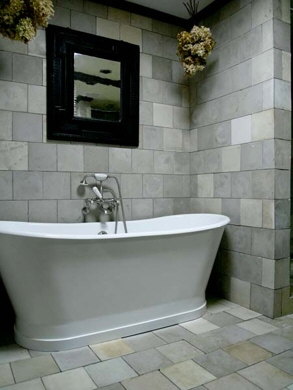 The master bath is tiled with late 19th/early 20th Century Spanish glazed concrete tile that are available on Michaels’ site in three different colors. The sinks are all carved stone. 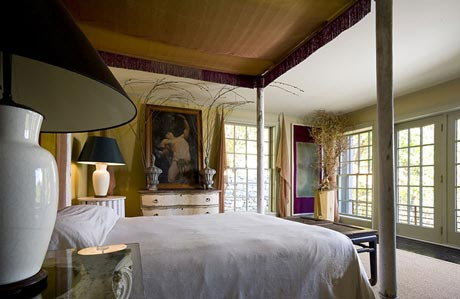 In the bedroom, a pre-Rafaelita painting of St. Sebastian is framed on either side with finials from a Samuel McIntire house. You can see Michaels’ love of antique architectural pieces in the side tables and throughout the house. 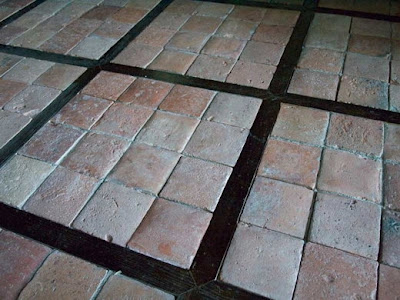 The floors are all inlaid 18th century French Terra cotta tiles from Burgundy all outlined with bands of dark stained wood.
Michael was able to open the house up and bring the light and outside in blurring the line between the two. If you’re interested in seeing a wonderful slide show featuring this house go Here.
If you're interested in seeing Michaels' shop with attached gardens and house go Cote de Texas Joni did a wonderful spread not to be believed.
Oh, if you're interested I did buy my new kitchen a little something from Michaels' shop here..... 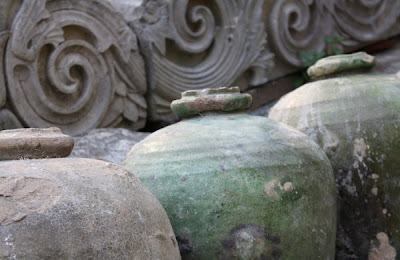 Wow! I've got to come back here and really study these images this weekend when I have time. I've been out of town and am just catching up with everything right now. There is some serious talent and innovative ideas here. A hint of Saladino don't you think?

It has been sometime because i have commented on someone elses work, luckily this is positive though. Excellent post, i is going to be reading this blog a lot more inside the future.